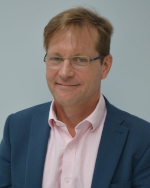 I am Head of the Department of Computer Science. These are very exciting times for Computer Science at Durham as it grows in staff, students, research capability, and degree programmes. Furthermore the department has a new home in the process of being built.

Before the transition to Computer Science - I worked in Physics and Astronomy - and the photo below shows one of my other homes - The Ogden Centre for Fundamental Physics illuminated at its Opening.

My research involves optics and the physics of light. Much of my work has involved adaptive optics which is a technology used in astronomy to improve the performance of large ground telescopes. The technology, like my research, has diversified and is now used in the biosciences, vision science, and computer graphics.

More generally, I am an applied physicist but I work with colleagues in vision science, computer science, and psychology on problems related to 3D displays, the optics of the eye, and computer graphics.

In Computer Science I work in the Innovative Computer Group. In Physics I work in  the Centre for Advanced Instrumentation.

I have taught a whole range of courses involving optics, astronomy, electronics, image processing and classical mechanics. I have also taught several external courses (including many years contributing to the SIRA Course on Optical Engineering and Imperial College's Short Course on Adaptive Optics).

My competed PhD. students (as primary supervisor) are

This is the "Durham Radio Telescope" on the roof of physics built up by a series of 4th year students working with me.

Widening the Appeal of Computer Science

As the Head of Computer Science, I have been very lucky to work with some fantastic colleagues to help promote gender-diversity in Computer Science. With the help of colleages at DARO and our generous alumni community we have set up the Anne-Marie Imafidon Women in Tech Scholarship Programme, and with the support of AtomBank and Stemettes we have played a small part in hopefully inspiring the next generation of Tech Leaders. The photo below shows (left to right) Sue Black, Gordon Love, one of our first Scholars - Lucy Woods, Alumnus Neil Hunt - former CPO of Netflix, Anne Marie Imafidon, Lauren Bradshaw and Andy Harston. In Oct 2019 we were extremely please to receive a $3.5M philanthropic donation from Neil to start the Hunt Programme to make a step-change in helping more women and also students from disadvanatged backgrounds to come to Durham to study computer science, and to create a programme to create more links with industry for our students. You can also read a related blog I helped create for the Department of DCMS.

I have a long standing collaboration with Martin Bank's Group at Berkeley, working on 3D displays, acccommodation, and some interesting work on animal eyes describing why different animals have different shaped pupils. See National Geographics, The Conversation, New York Times, The Guardian and others.

The following image of a statue and sundial is an example of some of my recent work on stereoscopic vision - showing how the eye synthesises differentially blurred images to produce a sharp whole. The image is a standard-cross-fused stereo image (view the left image with your right eye and vice versa in order to see a 3D image). You will see that as well as the camera position changing slightly between the two shots (which gives the 3D effect) the camera focus has been changed so that in the left hand image the statue is sharp and the gnomon is blurred, and vice versa. If you are able to cross fuse you will see an image where both appear to be sharp. (See link below to higher resolution image which might be easier to view).

Much of my early work revolved around using liquid crystal devices in non-display applications including switchable lenses and adaptive optics. My best known paper in this field was an Editor's Pick in 50 Years of Applied Optics.