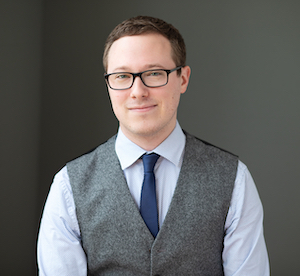 Newton International Fellow in the Department of Music

Austin Glatthorn is a British Academy Newton International Fellow. His research examines the interdisciplinary negotiation of music, politics, and aesthetics in Central Europe around the year 1800.

Austin completed his PhD at the University of Southampton in 2016, during which time he was a fellow of the Deutscher Akademischer Austauschdienst (2013-2014) and the Leibniz-Institut für Europäische Geschichte (2015). In 2016, he became the postdoctoral research fellow on the project ‘Opera and the Musical Canon, 1750-1815’ funded by the Social Sciences and Humanities Research Council of Canada and hosted by Dalhousie University. Immediately prior to joining Durham University, Austin was an Assistant Professor of Musicology at the Oberlin College & Conservatory of Music.

Austin’s research appears in book chapters and issues of Eighteenth-Century Music and Journal of Musicology. His most recent work on melodrama is forthcoming in Music & Letters and with AR Editions. Austin’s Eighteenth-Century Music article, ‘The Imperial Coronation of Leopold II and Mozart, Frankfurt am Main, 1790’, won the Mozart Society of America’s 2018 Marjorie Weston Emerson Award, while his ‘The Legacy of “Ariadne” and the Melodramatic Sublime’ is among the winning contributions to be featured in a special issue celebrating the centenary of Music & Letters in 2019.

As a British Academy Newton International Fellow, Austin is currently completing a monograph that explores music c.1800 through an investigation of the Holy Roman Empire’s extensive theatre network. Music of this period is most commonly understood in relation to Viennese classicism—a stylistic paradigm of instrumental music first conceived in the 1830s and developed well into the 20th century. But Austin argues that an imperial network comprised the framework in which musicians of varied national backgrounds (i.e., identifying with different states and languages within this often marginalized Empire) composed music that was consumed by an equally diverse musical public and that transcended the boundaries of local and national, as well as court and public cultures. In so doing, he seeks to illustrate that this, rather than some nineteenth-century construct, was the context in which music c.1800 was first composed, performed, and heard, thereby returning the story of Classical music to the eighteenth century.

In his teaching, Austin familiarizes students with the Western tradition’s most valued music, yet challenges them to engage critically with the canon. Drawing on his extensive archival work, he introduces students to a wide range of composers, styles, genres, performers, and performance spaces in order to empower them with the knowledge necessary to make their own informed decisions about music. To reach wider audiences, Austin often creates editions of music long since heard for performance and has worked with student ensembles to stage the modern premieres of such works in public concerts in the US, UK, and Germany.