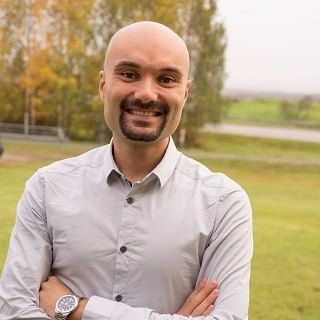 Member of the Department of Anthropology

Giuseppe is a current PhD candidate in the Department of Anthropology, having as his main subject Social Anthropology and Law as a minor.

In his PhD project, Giuseppe is studying the cumulative effect of the industrial developments on the BlueBerry River First Nation (BRFN), a small indigenous community living in Northeast British Columbia, Canada. By studying the proposed North Montney Mainline Pipeline (NMML), Giuseppe is interested in discovering how the expansion of the gas sector in the area is affecting the traditional lifestyle of the BRFN, while limiting their opportunity to enjoy their treaty rights (among others their right to land and natural resources and their claim to native title). The analysis of the NMML is meant to be a starting point to address the broader issue of the induced demand from industrial development in indigenous traditional areas.

Before joining the DurhamARCTIC PhD programme in October 2018, Giuseppe spent a few months as a visiting researcher at the Australian National University (Canberra) in the Department of Anthropology, where he carried its research on native titles in Australia and Canada, under the supervision of Nicolas Peterson. From September 2016 to June 2018, he was a researcher at the Arctic Centre in Rovaniemi, Finland, where he was enrolled in the PhD programme “Northern Cultures and Sustainable Resources Politics” and in this context he carried out extensive research on the Sámi of Northern Europe.

He received a European Master’s Degree in Human Rights and Democratisation (E.MA) in 2014, defending a thesis entitled “The legal position of the Sami in the exploitation of mineral resources in Finland, Norway and Sweden”, which was awarded with publication by the Institute for Human Rights of Åbo Akademi University. In addition, he holds a Master's Degree in Political Science and a Bachelor's Degree in Political Science and International Relations, both from the University of Trieste (Italy).

In addition to academia, Giuseppe worked as a junior researcher in ADA -Appui au Développement Autonome- a Development NGO based in Luxembourg, carrying out research on business and human rights. Furthermore, he has experience as a social worker in a refugee camp in Italy, working with migrants and asylum seekers.

7th May 2019, The cumulative effects of the expansion of the oil and gas industry on the BlueBerry River First Nation in British Columbia. 2019 Post Graduate Conference, Department of Anthropology, Durham University, UK. 7th May 2019.

4th December 2017, Promoting Sustainable Development in Indigenous Communities through the Implementation of the Principle of the Free, Prior and Informed Consent (FPIC) and the use of Traditional Knowledge (TK). International Conference on Policy towards Indigenous Peoples: Lessons to be learned! Hokkaido University, Sapporo (Japan), 2nd-4th December 2017.

Amatulli, Giuseppe, Microfinance and Human Rights: a possible coexistence? General study on the role of MFIs in contributing to fulfil Human Rights. ADA –

Amatulli, Giuseppe, The legal position of the Sami in the exploitation of mineral resources in Finland, Norway and Sweden. Åbo: Institute for Human Rights, Åbo Akademi University, February 2015. http://www.abo.fi/fakultet/media/24259/giuseppeamatullithesisfeb2015.pdf