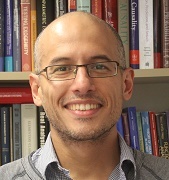 Associate Professor in Economics in the Business School

Majid Al-Sadoon began his academic career working on Granger causality in linear econometric time series models. This led him to pursue various other topics within time series analysis such as hypothesis testing and linear rational expectations models with applications to macroeconomics. In parallel, Majid has also contributed to the nonlinear dynamic panel literature. His most recent work has applied advanced techniques from functional analysis and linear system theory to study the econometrics of linear rational expectations models with applications to macroeconomic policy.