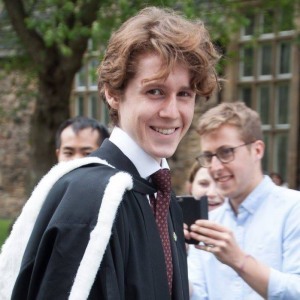 In 2013 I began my study for a BA in English Literature at Durham University, where I was awarded a First Class Honours degree in 2016. My dissertation was entitled ‘“Why þat yee meeued been / can I nat knowe”: Autobiography, Convention, and Discerning Doublenesse in the Works of Thomas Hoccleve’ and has since been published in an adapted form in Neophilologus. Between 2016-17 I studied for an MPhil in Medieval and Renaissance Literature at Cambridge University, where I was awarded a distinction.

At Cambridge, I began developing what I describe as a ‘formal paradigm’ for Chaucer’s dream-poetry, a recognisable framing narrative with implicit metafictional potential that is appropriated and adapted with varying degrees of sophistication throughout the long fifteenth century. My dissertation, ‘“Of dreflyng and dremys quhat dow it to endyte?”: A “Formal Paradigm” for Chaucer’s Dream-Poems and its Reception in the Works of William Dunbar and Gavin Douglas’, served as a testing ground for the PhD thesis that I would begin at Durham. This thesis, which is provisionally entitled ‘Dreaming of Authors and Authoring Dreams: The “Fiction of Authorship” in the Medieval Dream-Poem after Chaucer’ considers the utilization in diverse literary projects of the ‘fiction of authorship’ encoded in the dream-frame promulgated by Chaucer, as well as the reception and reproduction of that frame in manuscript and print. The fiction of authorship that I set out to describe is not specific to the dream-poem, it shares features with the framing narratives of other homodiegetic and indeed heterodiegetic medieval texts. I focus on the dream-frame, however, both for its huge popularity amongst vernacular writers and readers in this period, and as a mode for some of the most provocative experiments in the conceptualising of authoring and authority in late medieval English and Scottish literature. My supervisor for this project is Professor Corinne Saunders. My Phd is funded by an AHRC Northern Bridge Doctoral Training Studentship.

My recent research has been focused on late manifestations of the dream-poem in the early sixteenth-century, in particular, the work of John Skelton and Stephen Hawes in England and Gavin Douglas and William Dunbar in Scotland. My other research interests include late medieval autobiographical writing, the history of the book—particularly the interaction between manuscript and print and the evolution of paratexts—broader Anglo-Scottish literary and intellectual relations, Anglo-Saxon Northumbria, and the literature of Lancastrian England, where Thomas Hoccleve retains my lasting affection.