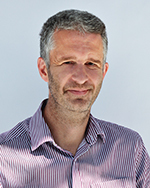 Alton Horsfall has joined the University of Durham as the Associate Professor in Electrical Engineering.

He graduated with a BSc and PhD in Physics from Durham in 1993 and 1997 and then spent two years working for the Defence Evaluation and Research Agency in the Future Concepts team, before moving to Newcastle University, where he became the Reader in Semiconductor Technology in 2011. He was awarded a Senior Research Fellowship from the Royal Academy of Engineering in September 2017.

Alton is a leading expert in the development of electronic and electrical systems for deployment in extreme environments, such as those found in jet engines, nuclear reactors, automotive exhausts and volcanoes. This includes the development of fundamental devices and processing, as well as the demonstration of a range of world first capabilities, including power electronics and communications systems that can operate at temperatures beyond 300C. He is currently developing amplifiers for radiation detectors that can operate within the nuclear island and high temperature current monitors for fault detection in power modules.

His recent interests include the use of quantum physics to accurately map the electric field distribution in a power semiconductor device in real time, that he is developing with collaborators at Heriot Watt University. This concept is being broadened to include the development of nano-scale magnetometry for fundamental studies and biological cell imaging.

He is also developing Solid State Transformer technology to enable a new generation of high power density power syetems for applications ranging from underwater ROVs to the grid connection of renewable energy sources at the microgrid level.

His research is funded by a range of companies including Rolls Royce, BAE Systems, IsoCom, Clas-SiC and Littelfuse, as well as EPSRC and Innovate UK.

He is a full member of the EPSRC College, sits on the Technical Programme Committee of the IEEE Sensors Conference and has won four best paper prizes from international conferences. He has successfully supervised 27 PhD students and won the prize for the best lecturer in the School of Electrical Engineering in 2014.

Alton is currently Guest Editor of a special edition of the Sensors Journal entitled Sensors for Extreme Environments. The call for papers can be found at http://www.mdpi.com/journal/sensors/special_issues/sensors_for_Extreme