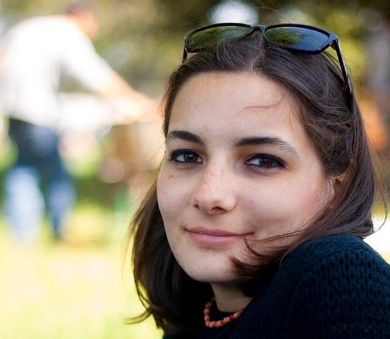 Currently a PhD candidate in Italian Studies and an AHRC Northern Bridge Doctoral Studentship holder, I am working on the intersection between Japanese culture and Italian literature in the second half of the Twentieth century. Main case study of my project is Italo Calvino: this comparative approach aims to shed new light on his mature production, by proposing Calvino’s contact with Japan as a fruitful and largely unexplored step in his development of post-Western and post-human coordinates. In the context of my research, in 2019 I was awarded a 3-month AHRC Training Grant to join the activities of the International Research Center for Japanese Studies (Nichibunken) in Kyōto.

My MA thesis in Italian Linguistics investigated the linguistic structure of Calvino’s novel Il barone rampante. That analysis originated an article on Calvino’s use of botanical language, collected in a special issue of Bollettino d’Italianistica dedicated to the 60th anniversary of Il barone rampante, which I co-edited. My previous BA thesis was a linguistic work as well, which approached Calvino’s Le città invisibili with the tools of a lexical, syntactical and structural comment. During both my MA (in Modern Philology) and BA (in Modern Literature) I was based at La Sapienza University of Rome.

I am currently a member of the School of Modern Languages and Culture’s Athena SWAN Self-Assessment Team and a postgraduate representative of the School’s Staff-Student Consultative Committee. I have represented postgraduate students in the Modern Humanities Research Association between 2018 and 2019, in which context I have been editor of the peer-reviewed journal MHRA Working Papers in the Humanities.