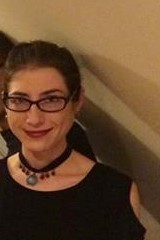 Abigail Richards is a PhD student working in the field of early modern literature. Her research is funded by the AHRC via the Northern Bridge Doctoral Training Partnership.

Abigail previously studied for a BA in English and Related Literatures at the University of York, from which she graduated with first class honours in 2013. She commenced her postgraduate study at the University of York in 2013, having received a bursary of £1000 in recognition of academic excellence. In 2014, she was awarded an MA with distinction in Renaissance Literature. Her MA dissertation was supervised by Dr Tania Demitriou, and entitled “‘Always one yet never the same’: Royal Mythology and Shadows of Authority on the Elizabethan Stage.” This project focused on the employment of classical mythology in representations of the gaze in Elizabethan court masques of the later sixteenth century.

At Durham, Abigail is supervised by Dr Mandy Green and Dr Robert Carver. Her thesis examines representations of Circe in early modern English and European literature, c. 1580-1670. More broadly, her research investigates the interaction between biblical and classical paradigms of female generative agency across this period.

Outside of her research and teaching responsibilities, Abigail has been involved in a number of editorial and outreach projects. In June 2015, she co-organised an international and interdisciplinary postgraduate conference entitled “The charm of the unfamiliar”: Myth and Alterity in Early Modern Literature. https://www.dur.ac.uk/english.studies/events/?eventno=24019

In 2016, Abigail acted as co-editor of the second volume of the MEMSA journal, a publication based on the conference proceedings of the 2015 MEMSA Student Conference, Darkness and Illumination: The Pursuit of Knowledge in the Medieval and Early Modern World.

Abigail currently holds outreach and engagement positions with Durham for Accessible Education, a campaign group that fights to make university education at Durham more accessible to students from disadvantaged backgrounds, and with MEMSA, Durham’s Medieval and Early Modern Student Association. Abigail is convenor of MEMSA’s 2017 community course, Alchemy, Astronomy, Witchcraft and Magic. Abigail is also co-editor of Renaissance Hub, a website launched in October 2016 which publishes new articles and reviews related to sixteenth-century European culture targeted at a non-academic audience.

Presented at the Annual Meeting of Postgraduates in Reception of the Ancient World (AMPRAW) conference, held at the University of Nottingham.

July 2015 “A Place in the Sun?: Circe and the Empiricist Legacy of Francis Bacon's Advancement of Learning”

Presented at the Darkness and Illumination: the Pursuit of Knowledge in the Medieval and Early Modern World postgraduate conference, held at Durham University

Presented at the Myth and Alterity in Early Modern Literature postgraduate conference, held at Durham University.

May 2015 “Moly in Early Modern Literature”

October 2016 Review of Comus, A masque in honour of Chastity

Published in Birmingham Journal of Literature and Language VII (2015): 58-60. http://www.birmingham.ac.uk/schools/edacs/departments/english/research/journals/bjll.aspx