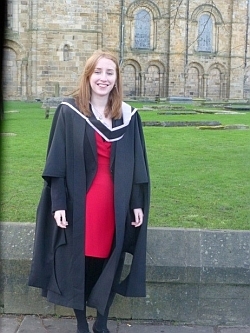 Before coming to Durham, I studied for my BA at the University of Cambridge, where I was awarded a First Class Honours degree in 2015. My interest in medieval literature developed early on in my undergraduate degree: I took the compulsory module on ‘English literature and its contexts, 1300-1550’ in my first and second year, and further chose to take modules on ‘Early medieval literature and its contexts, 1066-1350’ and ‘The medieval supernatural, 1066-1500’. In my third year, I wrote a dissertation on ‘Binding and Unbinding: Fashioning Narrative in Medieval Romance’, which looked at the role of clothing in allowing writers to self-consciously reflect on their work in medieval romance. My dissertation was supervised by Dr Lucy Allen.

After completing my undergraduate degree, I came to Durham to study for an MA in Medieval and Renaissance Literary Studies in September 2015. During my MA, I studied modules on ‘Narrative Transformations: Medieval Romance to Renaissance Epic’, ‘Old English Language and Literature’, and ‘The Anglo-Saxon World’, an interdisciplinary module based across the English, History, and Archaeology departments. I also took a core module in ‘Research Methods and Resources’, and audited ‘Palaeography’, taught within the History department. I wrote my master’s thesis under the supervision of Professor Corinne Saunders, entitled ‘Narrative (En)closure?: Rewriting Women in Insular Medieval Romance’. Drawing upon theories of trauma articulated in the field of the medical humanities, as well as work in cognitive narratology, this thesis argued that disruptive women in medieval romance are structurally rewritten to accord with the genre’s patterns of closure.

I am now studying for a PhD in Medieval Literature here at Durham, under the excellent supervision of Professor Corinne Saunders and Professor Elizabeth Archibald. I began my PhD in September 2016. The working title for my thesis is ‘Desiring Women: Representations of Female Desire in Medieval Romance’. Taking an approach in part theoretical, and in part grounded in the social and historical circumstances of the time, I seek to unravel the complex representations of desiring women across the medieval romance tradition.

My PhD is funded by Northern Bridge Doctoral Training Partnership, for the Arts and Humanities Research Council. I hope to continue on to an academic career after completing my thesis.

My main research interests include gender and sexuality, material culture and its representation in literary texts, marriage and social contexts, mental health, manuscript studies, the transmission and translation of texts (particularly between Middle English, Anglo-Norman and French), the continuity between the medieval and early modern periods, the use of medievalism and its presence in the modern world, animals and nature, place, monstrosity, otherness, and identity. Outside of my research, I am interested in access to higher education and cultural institutions, as well as the arts more broadly.

I would be very happy to discuss any aspect of my research or studies with anyone who would like to know more.

(Forthcoming) ‘Girl Power Then and Now: Medieval Romance, The Song of the Lioness and The Protector of the Small’, at ‘The Middle Ages in the Modern World’, University of Manchester, 28th June-1st July 2017.

‘Medieval Romance: What, Who, How, Why?’, Grey College Postgraduate Research Seminar, 24th November 2016.

Chair of the Medieval and Early Modern Student Association (MEMSA) at Durham, 2016-17.

Helped with the English department session during the Postgraduate Open Day at Durham University, 16th November 2016.