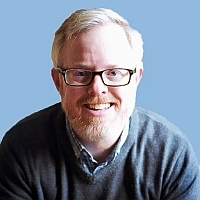 For his PhD thesis, supervised by Professor Corinne Saunders and Dr Peter Garratt, Michael is investigating the relationship between narrative structure and the alterity of dream visions in pre- and post-Norman Conquest medieval English literature—contrasting dream visions in Old English verse, Old and Middle English hagiography, and Middle English romances. Cognitive narratology provides the theoretical framework for this diachronic analysis, to help illuminate the role of blended mental spaces and conceptual frames in generating these embedded alternative storyworlds.

He also leads undergraduate tutorials for the English department’s ‘Romance and the Literature of Chivalry’ and ‘Chaucer’ modules, and is a member of Durham’s Old Norse and Old English reading groups.

In 2014, he received an MA with distinction in Medieval and Renaissance Literary Studies from Durham University. His dissertation, ‘Medieval English Literature’s Loathly Lady: Shame and the male gaze’ analyzed the role of revulsion in defamiliarizing the feminine through contrasting readings of the Loathly Lady figure in Gower, Chaucer, and ballads.

He received his BA with honors in English Literature from Seattle University in 1991, and has worked for Seattle Opera, Seattle Symphony, and the San Francisco Examiner; and with many other companies and organizations as a communications consultant.

A member of Ustinov College, he was awarded a Junior Research Fellowship for the years 2014-15 and 2015-16, during which time he was managing editor of The Ustinovian magazine and a member of the Global Citizenship Programme. In 2015-16, he was also elected Chair of Ustinov’s GCR. He was twice voted the award for outstanding contribution to college life by a PhD student.

2016 Cognitive Futures in the Humanities, Helsinki
15 Jun 2016, presenter
‘Guthlac in the Balance: Enacting Landscapes of Torment’

2014 MEMSA Annual Conference, Durham
9 Jul 2014, presenter
‘What the neuroscience of disgust can tell us about medieval English literature’s Loathly Lady’