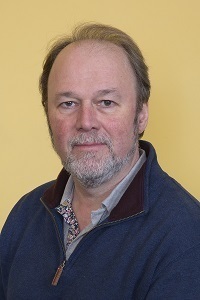 Some references about RM systems and DNA mimicry in case you want to know more:

1) Allostery without conformational change: a plausible model. A. Cooper, D.T.F. Dryden, Eur. Biophys. J. (1984) 11, 103-109. My first paper put forward the theory of dynamic allostery in biomacromolecules. Although I could not obtain experimental proof at the time, this model has subsequently been highly cited and shown to be correct. The paper is now considered to be the start of a deeper understanding of allostery.

2) A prediction of the amino acids and structures involved in DNA recognition by type I DNA restriction and modification enzymes. S.S. Sturrock, D.T.F. Dryden, Nucleic Acids Res. (1997) 25, 3408-3414. Shane Sturrock wrote some of the very first computer programs for sequence and secondary structure alignment. This paper showed that all of the target recognition domains of Type I RM enzymes had the same fold despite negligible levels of sequence similarity, a fact confirmed many years later by crystallography. I’m particularly fond of this paper as its first draft was written in pencil on scraps of paper in a San Jose hotel room.

3) Direct observation of DNA translocation and cleavage by the EcoKI endonuclease using atomic force microscopy. D. Ellis, D.T.F. Dryden, T. Berge, J.M. Edwardson, R.M. Henderson, Nature Struct. Biol. (1999) 6, 15-17. This was the first of many with Robert Henderson and Mike Edwardson at Cambridge. Our collaboration continues to this day and we have had several grants supporting our work.

5) Anomalous 2-aminopurine fluorescence in complexes of DNA with the EcoKI methyltransferase. T-J. Su et al., Nucleic Acids Res. (2004) 32, 2223-2230. This paper revealed a previously unsuspected physical chemical aspect of 2-aminopurine fluorescence. The initial discovery was made by an undergraduate project student during her time in my laboratory and she was a co-author on the paper. This discovery led to numerous papers with international collaborators using "nucleotide flipping" enzymes and revealed a defined and accurate signal for this flipping.

6) Strong physical constraints on sequence-specific target location by proteins on DNA molecules. H. Flyvbjerg, S.A. Keatch, D.T.F. Dryden, Nucleic Acids Res. (2006) 34, 2550–2557. This paper was a collaboration with a theoretical physicist who derived a theory for the location of a specific binding site on DNA when many non-specific binders were also present. Our data were well described by his theory.

7) How much of protein sequence space has been explored by life on Earth? D.T.F. Dryden, A.R. Thomson, J.H. White, J. R. Soc. Interface. (2008) 5, 953-956. This paper arose from reading about how “intelligent design” proponents try to argue for creation by misinterpreting the sequence space problem. As the article was open access, it was picked up by an internet discussion group in the USA and I had several interesting months of discussion with them about evolution and proteins.

8) Structure and operation of the DNA-translocating Type I DNA restriction enzymes. C.K. Kennaway et al., Genes and Development. (2012) 26, 92-104. This paper was the culmination of many years work on the Type I RM enzymes by the main authors. Following on from a meeting with John Trinick at the 2004 Newton Institute meeting, we obtained a 5 year BBSRC grant and interacted with teams in Portsmouth and Warsaw to solve this complex problem. Crucially, our structures satisfied all of the constraints imposed by 50 years of biochemical and genetic experimentation on these enzymes. The structures also suggested how RM structures may have evolved.