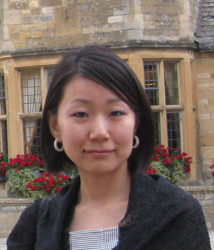 I have been interested in the relationship between writing, the body and arts, which led me to work on the filmic representations of the body for my BA thesis at the International Christian University in Tokyo, and on the sensation of falling bodies for my MA project in Performance Studies at New York University. My questions regarding performative language, embodied experiences and the cross-cultural translation/circulation of critical theories led me to my doctoral work at Oxford on touch in Japanese literature and its relationship to phenomenology and psychoanalysis, completed in 2014. Before coming to Durham in 2015, I lectured at the University of East Anglia in Norwich (2014-15).

My forthcoming book, Touching the Unreachable: Writing, Skinship, Modern Japan (University of Michigan Press, 2021), examines touch as mediated experience by memories of previous touching and the accumulation of sensations, all of which create an intersticial space between those in contact. In this book I argue that writing, in its inevitable physical and temporal distance both from the intended object within the story and indeed the reader, shapes a particular aesthetics of touch that involves attempting to touch that which is unreachable, in an endeavour that is essentially an act of translation of the felt experience into the verbalised. Touch is a way to invoke others as well as oneself, and in such a way as to expect some response in reaching the other, thinking of another’s mind, and imagining another’s experience.

In 2012, I received New Scholars’ Prize (second place), International Federation for Theatre Research, for my article: 'Ethics of Incorporation, Spasm, and the Sense of Otherness'. I have also contributed articles for performing arts journals and cultural organisations, and commissioned works for organisations including cutural complex Bunkamura in Tokyo, Japanese performing arts journal Danceart and Glyndebourne Opera in Sussex, UK.

My research interests lie in topics involving the body, the senses, love and intimacy, as well as translation issues, including the translation of bodily experiences into language, cross-media translation and the cross-cultural circulation of concepts and theories.

The body has become a radical site of inscription, exscription and political contestation, giving rise to the active search for the individual body and automonous subject in postwar Japan. This notion led to a collective pursuit of new individualities such as literature focused on the flesh, avant-garde art groups and dance/performance practitioners. These bodily experiments, prompted by translations of works by French thinkers such as Sartre and Merleau-Ponty into the Japanese context, led in the 1970s to the phenomenology boom and the emergence as well as development of a theory of embodiedness (called shintai-ron), conceiving of the body as a phenomenon. Artistic and intellectual cross-cultural encounters especially during the 1970s and 1980s transferred aesthetic features back and forth (in East Asia, Europe and the US), mutually shaping knowledge. This project explores embodied practices as the cross-cultural interactions and collaborations, which shaped and advanced the understanding of phenomenal bodies.

This project was funded by BA/Leverhulme Small Research Grant (2017-18). A few relevant articles are forthcoming.

I have also been working on dance criticism/writing and the translation and verbalisation of the non-verbal experience, including disappearance and sleep.