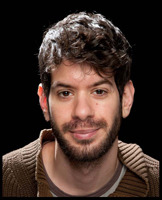 I took my bachelor degree in the National and Kapodistrian University of Athens, in the Histrory & Archaeology Department graduating with distinction. During my studies I completed the theses 'The sculptor Michael Tobros and the art magazine 20th Century' and 'The Late Roman houses in the north slope of Areios Pagos'. I continued my studies as a taught postgraduate student in Durham University completing the thesis 'Changing topography along the Gulf of Patras, from the 3rd AD century crisis until the reign of Justinian'. I graduated in 2014 obtaining a Master's degree with distinction. Since 2014 I am a full-time research postgraduate in the Department of Archaeology, Durham University.

The present study is aiming to understand the evolution of private space in the North-Eastern Peloponnese from the 3rd century AD to the 7th century AD, and the resulting effects on the urban and rural topography. That will bring forward the long-term trends that shaped the working and living compartments, as well as the needs and aspirations of their occupants.

Towards that end, the research focuses on a large geographic area that roughly corresponds to the modern Greek region of Corinthia. One principal goal is to explore the way the Late Roman Corinthians understood the public and the private realms, and how they saw themselves with respect to each setting. For that purpose, the study will discuss the changing settlement patterns in the urban, peri-urban and rural areas. This will give a better idea about the economic prospects of the North-Eastern Peloponnese during the examined period, and the response of the local communities to the rising challenges they faced. Key research topics here will be the implementation of the villa system, the growing numbers of the Late Roman village communities, and the long-term evolution of the urban fabric.

Another raised issue concerns the architectural design and function of the Late Roman private facilities. An effort is particularly made to highlight the impact of the post-3rd century AD social ethics and ideals, on the architectural design of private spaces. During the analysis, the possible public and private functions, the elaborate features, and the interposition within the urban grid will come forward, revealing a domestic environment designated to cater a spectrum of primary and secondary needs.

Finally, a third aim is to study the private decorative programme. Special focus is paid on the aesthetic and religious value of the artworks, to better understand the policies of placement and display. A second aspect that will come forward concerns the symbolic and sometimes imposing character of private art, which was designed to appeal to both the patron and his guests.