Flow cytometry is the science of measuring the physical and/or chemical characteristics of cells or other similarly sized particles (e.g. beads, micelles, microspheres) as they pass in a fluid, single-cell stream through a measuring apparatus. Each particle is interrogated by one or more lasers and the system measures the degree and direction of scattered light, this provides information about the particle’s shape, size and structure. The particles may also be stained with a fluorescent dye which is excited by the lasers; the fluorescence signals are collected by precise optical and electronic components, converted to digital values and sent to a computer for analysis. The important feature about flow cytometric analysis is that measurements are made separately on each particle in turn, and not just as average values for the whole population. Flow cytometers are able to analyse several thousand particles every second, in real time, and can actively separate and isolate particles displaying specified user-defined properties.

Durham University Chemistry Department is equipped with a Dako MoFlo® Cell Sorter which is equipped with three lasers (UV, 488nm and 633nm) and two scatter and nine fluorescence detectors. It can analyse and sort user-specified particles 4-ways into collection vessels (Eppendorf tubes, 96 well plates, microscope slides etc) at rates of up to 30,000 cells per second.

Organosilica microspheres have a huge range of potential applications, including catalysis, biomolecular screening, immunoassays and chemical sensors. Methods for synthesising microspheres which are monodisperse and can be readily functionalised are being investigated for use in flow cytometry. Monodispersity of size and uniform structure are important for reducing variability in bioassays and facilitating the use of simple statistics to quantify target loading. 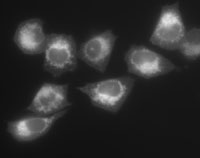 Activity-based probes are substrates of enzymes that are capable of turning on a trapping mechanism during the action of enzyme hydrolysis leading to the covalent modification of the specific enzyme. This project involves the design and synthesis of activity-based probes containing both a fluorophore and a fluorescence quenching moiety. On reaction with the desired enzyme, the probe will undergo a change in the basic structure, resulting in the elimination of a quenching moiety. This will ultimately result in the desired enzyme being covalently labelled with a fluorescent tag. Biological cells can be treated with the probe and any containing the enzyme of interest will metabolise the probe into a fluorescent form which covalently binds to the enzyme. The cells can then be analysed by flow cytometry and those exhibiting fluorescence will be sorted and identified.