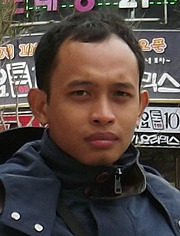 Erwin Nugraha considered himself as a practitioner on risk governance and climate change adaptation. He has experienced working with international non-government organisation at city and national level in Indonesia. He is graduated from urban planning for his undergraduate from Institut Teknologi Bandung (ITB), Indonesia and MSc Risk and Environmental Hazards from Durham University. He also has been participated in several courses and trainings by international organisations. He hold certificate for Project Management for Development Professionals - level 1 (PMD Pro1).

He is currently researching on risk governance and governmentality in experimental urban adaptation from Indonesian cities. His research will investigate cities in Indonesia that have joined the Asian Cities Climate Change Resilience Network (ACCCRN) and have begun to experiment with adaptation planning. The aim of his research is to: (i) analyse responses, actor networks, and rules and mechanism that are being used to govern risks associated with climate change and (ii) to evaluate critically these in relation to notion of Foucauldian governmentality or governmental rationality. His research will focus on the exploration of urban climate governance and how this has effectively worked at city level in developing countries, when prior institutional framework and regulations aren’t available.