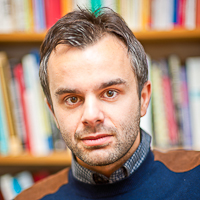 My first project was on Romanian Germans in modern Europe (Exodus: Romanian Germans in Modern Europe). I explored the narratives that Germans from Romania constructed of themselves over the course of the twentieth and twenty-first centuries. Their stories chart the turbulent twentieth century as they experienced most major developments in European history: the restructuring of Europe after the First World War, the rise of fascism, the Second World War, communism, and migration during and after the Cold War. I am currently working with the IKGS (Munich) and the Arbeitskreis für Siebenbürgische Landeskunde on a project on the radicalisation of Romanian Germans in the 1930s, as well as project with Cristian Cercel (Bochum) on transnational Germans.

My work and teaching covers memory cultures throughout east-central Europe and asks questions about memory construction and transmission. I am also keen to push against the boundaries of east-west divisions in memory studies scholarship. German minorities in east-central Europe and sites of memory in the 'Habsburg world' play a key part in rethinking memory boundaries.

My new project explores the discovery of the Carpathian Mountains, 1860-1914. From the 1860s, travellers, ethnographers, medics, and other ‘middle-class sceptics’ set out to discover the Carpathians. Over the next half century until the First World War they left behind a tapestry of writing, documentation, reports, visual material, correspondence and other traces. My project examines this confluence of a European interest in the Carpathian uplands that takes us away from the straightjacket of postcolonial readings of travel writing.

I jointly edited a special issue of National Identities with Tricia Cusack on 'The Making of Landscape in Modernity'. I am currently working with Emily Hanscam (Durham) on a project investigating the uses of ancient pasts in east-central Europe. Our first workshop, Digging Politics: The Ancient Past and Political Present, took place in Durham in June 2019.

I welcome research students who want to work on minorities, memory, travel, or other aspects of transnational/spatial history. My geographic is broadly-speaking the 'Habsburg world', Romania, as well as German-speaking world, but research supervision is not limited to that.

I currently supervise, either as first or co-supervisor: