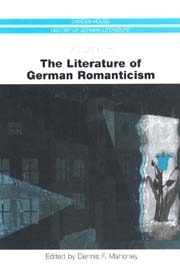 This volume of sharply focused essays by an international team of scholars deals not only with the most significant literary, philosophical, and cultural aspects of German Romanticism -- one of the most influential, albeit highly controversial movements in the history of German literature -- but also with the history and status of scholarship on the literature of the period. The introduction and first section establish an overall framework by placing German Romanticism within a European context that includes its English counterpart. Goethe and Schiller are considered, as are the Jena Romantics. The second section is organized according to the traditional distinctions between epic, dramatic, and lyric modes of writing, while realizing that particularly in the Romantic novel, there was an attempt to blend these three. A final group of essays focuses on German literary Romanticism's relation to other aspects of German culture: folklore studies, politics, psychology, natural science, gender presentation and representation, music, and visual art. Contributors: Gerhard Schulz, Arnd Bohm, Richard Littlejohns, Gerhart Hoffmeister, Ulrich Scheck, Claudia Stockinger, Bernadette Malinowski, Fabian Lampart, Klaus Peter, Gabriele Rommel, Martha B. Helfer, Kristina Muxfeldt, Beate Allert, Paul Bishop and R. H. Stephenson, Nicholas Saul.