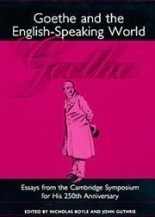 Saul, Nicholas (2002). Goethe and Colonialism: The Wanderjahre and Cooper. In Goethe and the English-speaking World. Essays from the Cambridge Symposium for his 250th Birthday. Boyle, N & Guthrie, J Columbia, SC: Camden House. 85-98.

Goethe's relations with the English-speaking world have been the subject of scholarly investigation ever since his lifetime. This volume brings together eighteen articles that provide new points of view, a broad range of approaches, and new and original findings on this relationship. These range from the discussion of applications of recent critical approaches such as chaos theory and Edward Said's Orientalism to Goethean texts, through other more empirical contributions that bring to light new material, some of it deriving from archives in Weimar relating to Goethe's contact with English culture. Other essays involve the reassessment of questions of influence, from both sides: in the case of Cooper and Goethe some standard assumptions are revised, while in the case of Goethe and Edith Wharton and Goethe and George Eliot, new comparative ground is broken. Close readings of portions of well-known texts such as Faust and Wilhelm Meister challenge standard assumptions. The analysis of selected recent translations of Goethe's poetry raises perennial questions of cultural transfer, while the survey of the role played by some of Goethe's texts in one corner of the English-speaking world, Dublin, is long overdue.