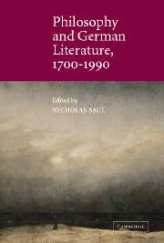 A coherent account of the importance of philosophy for German-speaking countries emerges from these six chronologically arranged chapters … for anyone embarking on a course of study of modern German thought or who is looking for a point of orientation, it can be recommended, not least because it has few competitors.