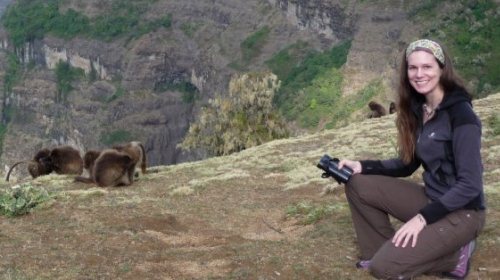 Setchell JM. 2019. Studying Primates: How to Design, Conduct and Report Primatological Research. Cambridge University Press. I welcome feedback if you're using this.

New article in Bioscience on biases in primate research and a severe lack of evidence needed to effectively conserve primates. I'm one of a team of 59 primatologists from 21 countries who worked with the Conservation Evidence Initiative in Cambridge to examine the evidence base underpinning efforts to conserve primates. Headline - most of the time, we don't know what works and what doesn't work.

At Durham I teach biological and evolutionary anthropology at undergraduate and postgraduate levels. I obtained my Post-Graduate Certificate in Teaching and Learning in 2008. I won a Durham Student's Union "Super Supervisor" award in 2014 and a University "Excellence in Doctoral Supervision" award in 2015.

I am strongly committed to advancing equity and inclusion in academia, and led our department's successful application for a Gender Equality Charter Mark in 2014.

I have served on the University Senate as an elected representative of the Academic Electoral Assembly, as Director of the MSc in Evolutionary Anthropology, Chair of the Exam Board and Director of Research in Anthropology.

I enjoy public engagement, including appearances in BBC4's The Secrets of Skin, BBC2's Nature’s Weirdest Events and BBC4's "Colour: The Spectrum of Science".

I pursue two major areas of research. The first integrates behaviour, morphology and demographic studies with genetics, endocrinology and semiochemistry to address questions relating to reproductive strategies, life history, sexual selection and signalling in primates. The majority of this work has focused on a semifree-ranging colony of mandrills at the Centre International de Recherches Médicales, Franceville (CIRMF), Gabon. For more about my long-term studies of mandrills, please see this review. I have also conducted primate fieldwork in Cameroon, Republic of Congo and Sabah, Malaysia, including personal experience of conservation issues and primate reintroductions.

The second area of my research involves collaboration with environmental anthropologists to address questions concerning human/wildlife interactions and biodiversity conservation. We have recently described our interdisciplinary approach and three case studies here.

I have a long-standing interest in the practice and ethics of primate research. I co-edited a book on Field and Laboratory Methods in Primatology with an explicit focus on ethics, helped to develop the International Primatological Society's Code of Best Practices in Field Primatology, and have co-authored an article with Elena P Cunnigham and Steve Unwin on "Darting Primates in the Field: A Review of Reporting Trends and a Survey of Practices and Their Effect on the Primates Involved".

You can find details of my publications below and on Researchgate.

Information for Prospective Students and Postdocs

I'm happy to supervise interns, MSc, Masters by Research and PhD students in primatology. I am happy to work with applicants who share my research interests to develop a proposal.

There's information about a variety of postdoctoral fellowship opportunities here.

I prioritise applications which relate to and build on my own research.