Our research response to the Covid-19 pandemic

We conduct boundary-breaking research that improves lives across the world. Here’s how we’re applying that research to help people combat the devastating effects of the Covid-19 pandemic and help chart the route to recovery. 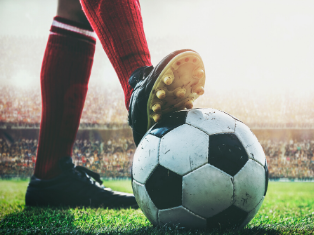 Neil Graney from the Business School explores the impact of Covid-19 on sport, particularly football.

The Covid-19 pandemic has brought about unprecedented times in sport. Not since the world wars of the early 20th century has the global sports industry been so disrupted.

Here in the UK, leaders in sport were initially operating on a basis of following government guidance, without any real drastic measures. Then a watershed moment: reports that Arsenal manager Mikel Arteta had tested positive for the virus. Suddenly, the landscape changed. The Premier League held an emergency meeting, along with the English Football League (EFL), and subsequently all professional football was suspended until 3 April, which has now been further extended to 30 April. Around the same time of the initial meeting, the vast majority of major sporting fixtures were cancelled or suspended, with Cheltenham festival and Rugby Super League some notable exceptions.

So, what about the impact of the crisis on football?

Whilst public safety is paramount, the integrity of competition will also be central to the discussion for leaders of the Premier League and the EFL. With Liverpool on the verge of their first title in almost 30 years, and EFL clubs vying for financially rewarding promotions, a recommencement of the current season at some point, must remain the number one priority outcome. However, given the uncertainty of the pandemic, amid growing concerns for public health, it is likely to be too early to make definitive conclusions. It has been largely suggested that the postponement of EURO 2020, due to take place across 12 different European countries between June and July, will crucially allow English football time to reassess the situation in the coming months, and possibly play out the remainder of the 2019-20 season over the summer.

Also central to the discussion will be finances. In football, those clubs at the top of the league pyramid will be less affected, with most clubs having five or six homes games left to maximise matchday revenue. However, the financial model of Premier League clubs relies less on matchday revenues, compared to EFL clubs, where the need to make money from home fixtures is crucial to their success and sheer existence. Not to mention the effect on SMEs around football clubs (e.g. pubs and cafes, which as of 21 March will be forced to close) who rely heavily on matchday footfall. There are already league clubs struggling to pay wages, therefore the effects of the pandemic could prove catastrophic for many lower league clubs and stakeholders who make up to two thirds of their revenue on match days.

Finally, jobs. The suspension of professional football has exposed the uncertain nature of working the in the industry. Support staff, journalists, photographers and event professionals, who often work as freelancers, suddenly do not have a product to generate their income. Where zero hour or short-term contracts, and self-employment reigns, there is a real challenge for football leaders and government to protect the livelihood of many thousands working in the game.