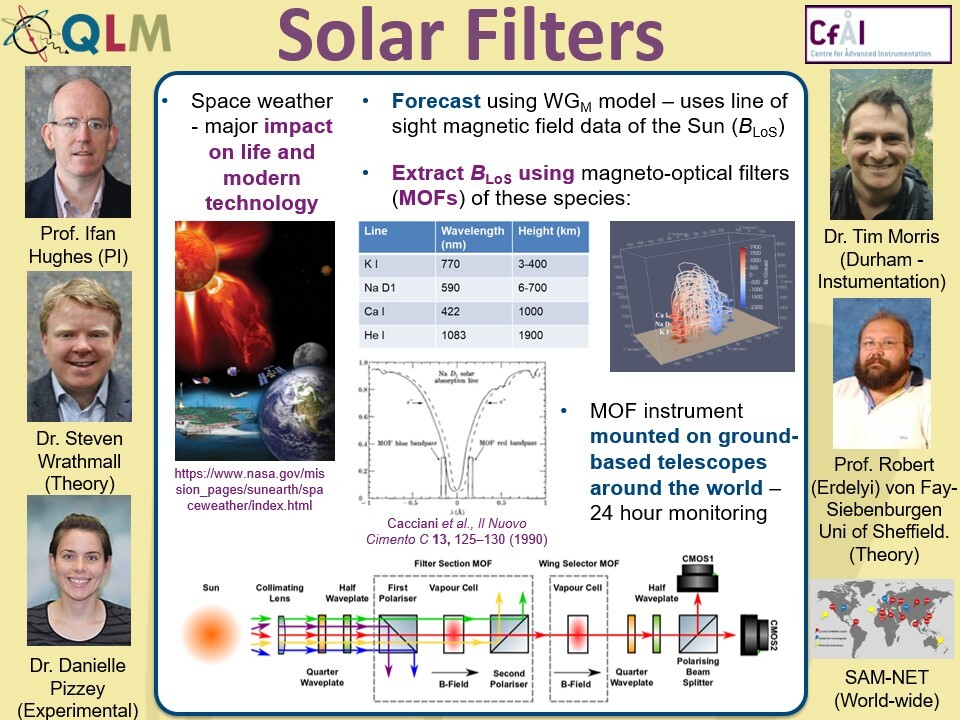 Narrow-band optical filters are used in a variety of applications in laboratories for filtering out a signal frequency over a crowded background. While the best thin-film interference bandpass filters have bandwidths of a few nanometres, using atomic media to create bandpass filters can yield bandwidths around 3 orders of magnitude smaller, while still retaining high pass-band transmission.

There has been much research focussing on atomic Faraday filters (often known in the literature as FADOF filters, though the acronym is misleading), where a near-resonant atomic medium is placed between two crossed polarisers in the presence of an axial magnetic field. The axial magnetic field is responsible for the Faraday effect, a magneto-optic effect whereby the polarisation of light is rotated as it traverses a medium. The optical rotation can be engineered to be close to 90 degrees, leading to almost complete transmission in the pass-band.

We have been investigating atomic filtering in Durham for a number of years; some links to our published papers can be found on the publications tab.

For this example, we take the simplest atomic structure required for atomic line filtering. The most basic atomic level scheme where it is possible to observe Faraday rotation is the J=0 to J=1 system with 4 mJ levels (which can be realised in, e.g. Sr). Figure 1 shows the energy level structure of this system. In the absence of an applied axial magnetic field (dashed lines), the sub-levels of the J=1 manifold are degenerate and there is no preferred quantisation axis. All 3 transitions (J=0,mJ=0→J=1,mJ=0,±1) can be driven.

Fig 1: Energy levels of the J=0 to J=1 system in the presence of a magnetic field

The application of an axial magnetic field has two effects. First, the energy level degeneracy is removed due to the Zeeman effect, which shifts the energy levels according to their mJ quantum number by an amount â„ΔB=mJμBB, where μB is the Bohr magneton. Second, the magnetic field axis now defines a quantisation axis. In the Faraday geometry, the magnetic field axis is aligned with the propagation axis of the light field. The electric dipole transition selection rules mean that only ΔmJ=±1≡σ± transitions can be driven (π transitions are forbidden), by the application of left/right circularly polarised light (Linearly polarised light can be decomposed into equal components of the circular basis and will drive both σ+ and σ−transitions). Since the absorption and dispersion for each circular polarisation are displaced in frequency, the medium is both circularly dichroic and birefringent, respectively. As shown in figure 1(b) the transmission of each polarisation component can be considered it's own 2-level system with it's resonance frequency shifted by ±ΔB, and with corresponding complex refractive indices (fig. 1(c)) n± associated with σ± transitions, respectively.

To calculate the total transmission, phase shift and optical rotation, one must propagate the electric field through the atomic medium. The two polarisation components experience a medium with different refractive indices, and so pick up a relative phase shift. A phase shift between circular components leads to a rotation of the plane of linear polarisation, given by ΔÏ•=(nR−nL)kâ„“/2, where nR,L are the refractive indices associated with the σ± transitions (the exact coupling depends on whether the magnetic field vector points parallel or anti-parallel to the light wavevector).

This Faraday optical rotation is frequency-dependent, and when combined with a pair of crossed-polarisers as shown in fig. 2, this creates an optical bandpass filter with a distinctive spectral profile. A typical profile is shown in fig. 3 below. Off resonance, at large detuning, [region (i)] the atom-light interaction is negligible, there is no optical rotation, and the crossed-polarisers mean that no light is transmitted. In between the split lines [region (iii)] there is still a significant optical rotation, combined with very little absorption, so here the filter transmission is maximised. The optical rotation can be engineered through the amount of atom-light interaction (by changing the atomic density) so that there is approximately π/2 rotation at the peak, leading to a filter with very little loss. Where either circular polarisation is strongly absorbed [region (ii)], the total filter transmission is approximately 1/4, since half the linearly polarised input light is absorbed, leaving pure circularly polarised light, which is then attenuated by another factor of 2 by the second linear polariser.