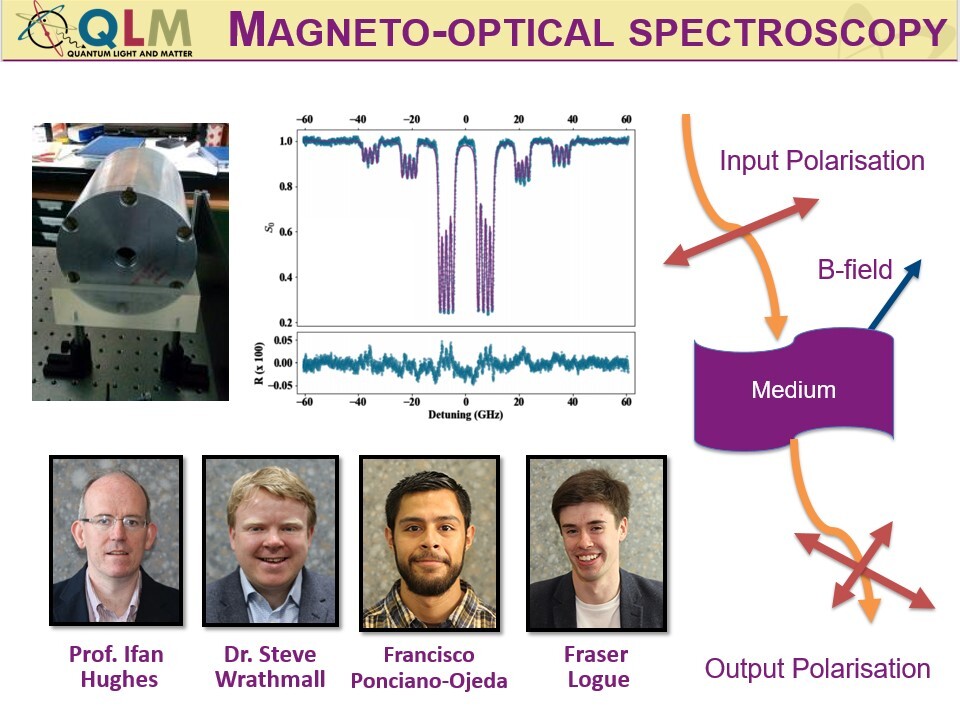 We investigate the interaction between alkali-metal atoms and light in large magnetic fields, where typically the Zeeman effect dominates over the internal atomic structure. In this regime, known as the hyperfine Paschen-Back regime, atomic transitions can be separated by more than the Doppler width, allowing individual 2-, 3- and 4-level atomic systems to be realised without the need for either optical pumping or laser cooling.

In a weak external magnetic field, the nuclear spin I and the electron angularmomentum J couple to give the total angular momentum F; the latter and its projection onto the field axis, mF are good quantum numbers. Decoupling of I and J occurs for stronger fields, and these vectors precess independently about the magnetic field; their projections mI and mJ are the good quantum numbers in this regime. An estimate for the decoupling field, B0, above which the hyperfine Paschen–Back regime is achieved is given by B0=Ahfs/µB,where Ahfs is the ground-state hyperfine coupling coefficient, and µB is the Bohr magneton. For Rb, B0∼0.25T.

Even at magnetic fields that are a significant fraction of a Tesla, the ground state of the alkali atoms does not completely decouple into the mI,mJ basis; the true state is a superposition of quantum numbers, as shown in the figure below.

We plot above the Breit Rabi diagram for the 5S1/2 state of 87Rb up to 0.5 T, with the state decomposition in the mI,mJbasis (L=mL=0âŸ¹mJ=mS). Even at this large field there remains a small admixture of states, which gives rise to the 'weak' transitions in the spectra below.

Whilst small fields on the order of a few tens of mT (few hundred Gauss) can be generated with small conventional coils, to produce uniform fields of the order of 1 Tesla we use permanent NdFeB magnets.

The top-hat magnets, shown below, are able to generate a near-uniform (<0.1 mT) field of around 0.6 Tesla over the central 2 mm region when placed close together.

In this central reigon between the two magnets, we place our heated small vapour cells and investigate spectroscopic signals.

The plot below shows the expected signal from a 1 Tesla transverse magnetic field, with the input polarisation at 45 degrees to the magnetic field axis such that σ± and π atomic transitions are driven. The plot below shows the same Breit-Rabi diagram, but for both the ground and excited states. The arrows show which transition comes from which group of states, and their position horiztonally corresponds to their frequency detuning (zero is defined by the weighted line-centre, so the spectrum appears to be almost symmetric).

For Rb87, excited on the D2 line, the spectra form six groups of four peaks. Two groups come from each of the σ± and πtransitions, and on the figure are labelled with red, blue and olive lines, respectively. As well as these strong transitions, there are also six groups of 3 'weak' transitions, which arise from the incomplete decoupling of the ground state into the mI,mJeigenbasis. In the central regions of the spectrum, these are almost degenerate (separated by the 5P state mI splitting, which is much smaller than the Doppler width) with the strong transitions, but in the extreme wings of the spectrum they appear by themselves.

In the spectrum above, each transition is separated by more than the Doppler width, so even though this is a thermal vapour we can think of each transition as a separate two-level system. By adding more lasers that couple additional atomic states, we can address isolated 2-, 3- and 4-level systems.

In the HPB regime, due to the isolation of a 3-level system, we can demonstrate text-book EIT signals, an example of which is below (taken from Whiting et al. PRA 2016).

By adding to the optical setup a second coupling laser, which is counter-propagating to the first coupling laser, we can realise electromagnetically induced absorption, instead of transmission, which arises from multi-photon resonances. This would be impossible to visualise in a multi-level system, but in the HPB regime with our 3-level system this becomes clear. The plot below shows the EIA lineshape, and a fit to our data based on a mutli-photon absorption model (see Whiting 2015 Opt Lett for more details).

The top panel of the plot shows ...

Spectroscopy up to 8 T demonstrated in the Faraday geometry...