Background to the Shakespeare Folio

In the English-speaking world it has grown to symbolise our culture. On the world stage it equals any printed work as the physical embodiment of the human experience.

The Shakespeare First Folio is considered to be "a cornerstone of English literature".

Published in 1623, the Folio included 36 of Shakespeare's plays and was designed as a lasting monument to his dramatic work.

It founded Shakespeare's reputation as the greatest dramatist in the English language and his subsequent rise to become one of the most important figures in world literature.

Some 750 copies were printed and sold, of which no more than 230 survive today. This is considered to be a relatively large number reflecting the classic status the work achieved in the centuries after its publication.

The largest collection of copies (79) is held in the Folger Shakespeare Library in Washington DC. It was there, in 2008, that Raymond Scott took the copy that had been stolen from the University Library on Palace Green, in Durham, in 1998.

The Durham copy of Shakespeare's First Folio is the only one known to have stayed in the same personal library since its purchase in the 17th Century by John Cosin, who probably bought it new.

The shelfmark of Peterhouse College, Cambridge, now lost with the title-leaf which was removed after the folio's theft, prove that it was in Cosin's possession before 1644. Cosin was Master of Peterhouse before becoming Bishop of Durham in 1660.

Durham's Shakepeare First Folio had been valued at £3million, but due to the damage it has sustained, is now valued at £1.5million.

The collection of an author's works into a large folio volume was a high-status activity. Of the major authors, only Chaucer, Ben Jonson and Shakespeare were published in folio collections of their works.

Dr Sheila Hingley, Head of Heritage Collections at Durham University, said: "As a book, the Shakespeare First Folio is an iconic example of Western printing.

"Along with its near contemporary, the King James Bible, it has become a cornerstone of English literature.

"In the English-speaking world it has grown to symbolise our culture. On the world stage it equals any printed work as the physical embodiment of the human experience." 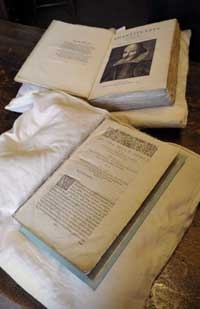 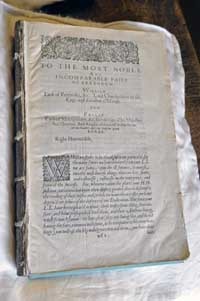