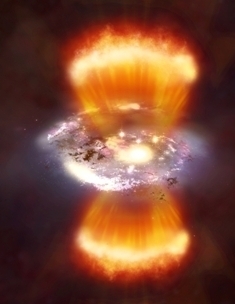 Artist’s representation showing outflow from a supermassive black hole inside the middle of a galaxy (Credit NASA/CXC/M.Weiss).

Scientists have found evidence of a "catastrophic event" they believe was responsible for halting the birth of stars in a galaxy in the early Universe.

The researchers, led by Durham University's Department of Physics, observed the massive galaxy as it would have appeared just three billion years after the Big Bang when the Universe was a quarter of its present age.

According to their findings the galaxy exploded in a series of blasts trillions of times more powerful than any caused by an atomic bomb. The blasts happened every second for millions of years, the scientists said.

The explosions scattered the gas needed to form new stars by helping it escape the gravitational pull of the galaxy called SMM J1237+6203, effectively regulating its growth, the scientists added.

They believe the huge surge of energy was caused by either the outflow of debris from the galaxy's black hole or from powerful winds generated by dying stars called supernovae.

The Durham-led team hopes the finding could increase understanding about the formation and development of galaxies.

Properties seen in massive galaxies near to our own Milky Way suggest that a major event rapidly turned off star formation in early galaxies and halted their expansion.

Theorists, including scientists at Durham University, have argued that this could be due to outflows of energy blowing galaxies apart and preventing further new stars from forming, but evidence of this has been lacking until now.

Lead author Dr Dave Alexander, of Durham University's Department of Physics, said: "We are looking into the past and seeing a catastrophic event that essentially switched off star formation and halted the growth of a typical massive galaxy in the local Universe.

"Effectively the galaxy is regulating its growth by preventing new stars from being born. Theorists had predicted that huge outflows of energy were behind this activity, but it's only now that we have seen it in action.

"We believe that similar huge outflows are likely to have stopped the growth of other galaxies in the early Universe by blowing away the materials needed for star formation."

The Durham-led team now plans to study other massive star-forming galaxies in the early Universe to see if they display similar characteristics.

Durham University is part of a team building the K-Band Multi-Object Spectrometer (KMOS) for the European Southern Observatory's (ESO) Very Large Telescope. KMOS will be used to further investigate the physical and environmental processes that shape the formation and evolution of galaxies.