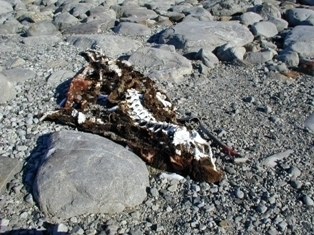 During a time of change, the seals established a new breeding site thousands of kilometres from existing breeding grounds.

An international research team, including post-doctorate Dr Mark de Bruyn and collaborators from the US, South Africa and Italy, led by Professor Rus Hoelzel from the School of Biological and Biomedical Sciences, Durham University, found that when the Antarctic ice sheets of the Ross Sea Embayment retreated in the Holocene period 8,000 years ago, elephant seals, Mirounga leonina, adopted the emergent habitat and established a new population which flourished.

DNA sequences from the ancient remains of seals from the now extinct Antarctic colony showed high levels of genetic diversity, probably due to the very large population size sustained there. The study, published in the academic journal PLoS Genetics, and funded by the US National Science Foundation, shows how environmental change can drive the demographic and evolutionary processes that determine diversity within and among species.

Tracking these processes during periods of change reveals mechanisms for the establishment of populations, and provides predictive data on response to potential future impacts, including those caused by climate change.

Professor Rus Hoelzel said: “In general, this approach of looking to the past to understand what might happen in the future, has good potential for predicting the impact of environmental change in both marine and terrestrial systems.

“We’ve shown how a highly mobile marine species responded to the gain and loss of new breeding habitat. The new habitat was quickly adopted, probably because seals migrate annually into Antarctic waters to feed. However, when the ice returned and the habitat was lost, only a small proportion returned to the original source population. The Antarctic population crashed and much diversity was lost.”

This habitat was released after the retreat of the grounded ice sheet in the Ross Sea Embayment 7,500-8,000 years ago, and is within the range of modern foraging excursions from the Macquarie Island colony. Using ancient mtDNA and evolutionary models, the research team tracked the population dynamics of the now extinct colony and the connectivity between this and modern breeding sites.

The team found clear signs of rapid expansion in the new colony 8,000 years ago. This was followed by directional migration away, coupled with a loss of diversity 1,000 years ago, when the sea ice is thought to have expanded. The data suggest that the new colony seals came initially from Macquarie Island, and that some returned there, but in much smaller numbers, when the new colony habitat was lost 7,000 years later.

In order to understand how biodiversity is generated and maintained over time, the team has set out to understand the process by which the seal populations formed and diverged. They analysed data from ancient DNA to show how elephant seal populations responded when new breeding habitat was gained and then lost over the course of approximately 7,000 years.

Professor Rus Hoelzel said: “Using ancient DNA, we were able to track the dynamics and diversity of a population from its foundation, through to its extinction, in the context of Holocene climate change. We learned that new habitat emerging within the species’ migratory range could be quickly taken advantage of, but that the reverse was not true. The movement patterns of seals from this Antarctic breeding site would have been unlikely to take them near other potential breeding sites, and so when their breeding site was lost, their numbers crashed.

“The seals that discovered the new breeding site had things good, because food was abundant and nearby, however when the ice returned, the new colony collapsed and only a few seals made it back to their original home.

“This illustrates the importance of understanding the behaviour and life history of a species, in order to model how it may be able to respond to rapid change.”

The key factors in the expansion of the new colony were likely to be the abundant local food resource and extensive physical habitat that allowed rapid expansion after the initial founder event, and a tendency for females to return to annual breeding sites in this species.

When the ice expanded again 1,000 years ago, the seals returned to their origins but in much smaller numbers.