Mapping the universe in 3D 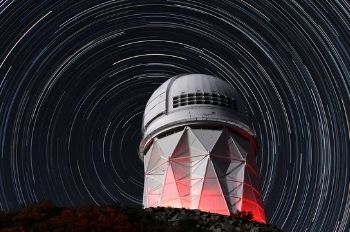 We’ve helped design and build a new telescope instrument that aims to create the most extensive 3D map of the universe ever attempted.

We’ve also helped design the scientific goals of the DESI mission, which will capture and study the light from about 30 million galaxies and other distant objects.

This will help scientists build a 3D map of the universe with unprecedented detail.

DESI is an instrument installed on the Nicholas U Mayall 4-metre Telescope in Arizona, USA, and brings together 500 scientists at 75 institutions across 13 countries.

It features new optics that increase the field of view of the telescope and includes 5,000 robotically controlled optical fibres.

Led by Durham, the fibre-optic sysyem will split light from objects in space such as galaxies, quasars and stars into narrow bands of colour and reveal the chemical make-up of objects as well as information about how far away they are distance and how fast they’re travelling.

By looking at how far and how quickly galaxies and quasars are moving away from Earth, researchers will be able to gauge how much and how fast the universe has been expanding.

The 3D map they will create will show a detailed distribution of galaxies which is expected to give new insights on the influence and nature of dark energy on the formation and evolution of galaxies and on the properties of dark matter.