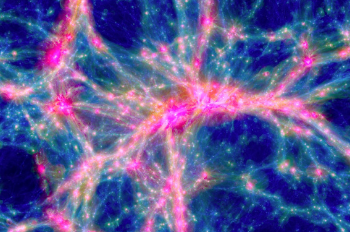 From supermassive black holes to the hunt for dark matter, Durham’s scientists are at the forefront of investigations into the evolution of the universe.

Our astronomers and cosmologists are world-leaders working with fellow researchers across the planet to further our understanding of the cosmos and our place in it.

This research will form the basis of the latest in an international webinar series promoting the partnership work of the University and the Chinese Academy of Sciences.

The webinar will describe recent research into the on-going heartbeat of a supermassive black hole located 600 million light years from Earth.

The repeated beat from this cosmic giant – created as the black hole feeds on its surroundings – was seen again in 2018 more than ten years after first being observed.

It’s the most long-lived heartbeat ever seen in a black hole and tells us more about the size and structure close to its event horizon – the surrounding space from which nothing, including light, can escape.

Our research analyses this intriguing signal, and compares it with the behaviour of stellar-mass black holes found in our own galaxy, The Milky Way.

This will help us to better understand the physics of such supermassive black holes, which play a crucial role in the evolution of galaxies and the universe at large.

Alongside this, the webinar will explore the work of our cosmologists who use supercomputers and state-of-the-art models to simulate the universe’s evolution.

Recently, they’ve used these simulations to zoom in on the smallest clumps of dark matter in a virtual universe.

The equivalent to being able to see a flea on the surface of the Moon, this detailed research could help us to discover the real thing in space.

Most of the universe’s matter is invisible and therefore dark, and completely different in nature from that which makes up stars, planets and us.

By focussing in on the simulated, virtual universe in such exquisite detail, our researchers studied the structure of dark matter haloes ranging from those of the mass of the Earth up to the biggest galaxy cluster.

This research sheds new light on small dark haloes, as we seek to learn more about what dark matter is and the role it plays in the evolution of the universe.