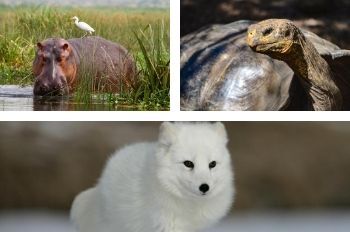 (Clockwise from top left) The Hippo, Giant Tortoise and Arctic Fox are all species affected by past abrupt changes in climate

Evidence from Earth’s past warming events should be built into forecasts showing how today’s climate change could affect different species and ecosystems.

Durham’s bioscientists were part of an international team of researchers that identified and examined past increases in temperature similar to those anticipated in the coming decades.

The research aims to better understand how species and ecosystems will cope in a warming climate.

It shows that safeguarding natural systems and the benefits they provide for the community against future climatic change requires effective solutions that can only come from reliable forecasts.

Approximately 40 per cent of Earth’s ecosystems are projected to have experienced shifts in temperature during the past 21,000 years that are similar in pace and magnitude to regional-scale future forecasts.

The research team used fossil and molecular data from the Arctic, Eurasia, the Amazon and New Zealand to identify biological responses to potentially dangerous rates of climatic change.

In their paper they give examples of different species affected by previous abrupt changes in climate including:

The researchers hope their evidence will help conservation biologists to gain the understanding needed to develop scenarios of potential future biodiversity losses from climate change to help minimise those losses.