How effective are primate conservation measures? 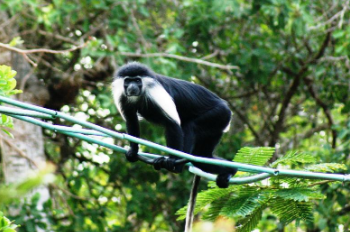 With about 60 per cent of the world’s primate species threatened with extinction, conservation efforts are now more important than ever.

However, research by a team of world-renowned experts in 21 countries including one of our anthropology experts at Durham, has found that conservation measures are hardly ever evaluated, meaning we rarely know which ones work and which ones don’t.

The team examined 13,000 primate studies and found that only 80 of these investigated the effectiveness of primate conservation interventions – less than one per cent.

Despite great protection efforts, extensive research and conservation funding, the world’s populations of primate species are still dramatically declining. The researchers suggest the lack of evidence-based conservation plays a role in this pattern.

The team recommend several actions to address the problem, including funding specifically aimed at testing the effectiveness of interventions and guidelines on how best to do this.

Although primates receive a lot of research attention and conservation funding compared to other taxonomic groups, the study found that only 12 per cent of threatened primates and only 14 per cent of all primate species were covered by the intervention studies.

The study highlights the need to focus research on threatened species and understudied regions.

The effectiveness of the vast majority (79 percent) of interventions reviewed in the study was unknown. Reasons for these knowledge gaps include a lack of quantitative data, not monitoring primates after an intervention, or trying multiple interventions at the same time, meaning that it’s impossible to determine which one, if any, worked.

The team also identified challenges which can hamper the effective evaluation of interventions. For example, primates can be very difficult to find and count in dense forests, so it can be hard to determine whether the intervention led to stable or increased population sizes - the ultimate goal of conservation. Primates also live for a long time and reproduce slowly, so it can take years to find out whether an intervention has led to a healthy population that is viable long-term.

Working on evaluations of interventions in primate conservation and publishing the research in appropriate journals can also be extremely time and resource intensive which can put primate researchers off, particularly if they are focused on active conservation. Nevertheless, carefully-designed studies are crucial to find out which interventions actually work.