Baboons do not view researchers as neutral 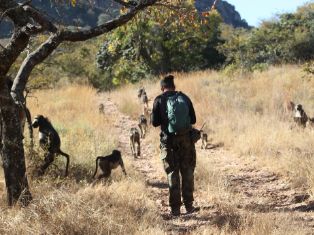 Baboons who are used to researcher presence are less tolerant than we thought, according to a new study by our anthropologists.

It had been widely presumed that researchers can use habituation to remove the fear that study animals have towards them, leading to animals ignoring people at close range. This allows researchers to collect behavioural data directly, under the assumption they don’t influence the animal’s behaviours.

It had also been assumed that all animals are equally used to the presence of researchers.

The study explored these assumptions in a group of wild chacma baboons in the western Soutpansberg Mountains of South Africa that were habituated to researchers over many years.

Using a behavioural experiment, the study measured the distances at which an animal will look towards and flee from the approaching threat of a researcher walking directly towards them.

The baboon’s behavioural responses to these approaches suggested they viewed researchers as equivalent to a high-level social threat. Researchers were far from being neutral, despite habituation.

Tolerance is a personality trait

The results also revealed that the level of tolerance that different members of the group had towards researchers was consistent within and varied between individuals – evidence for a personality trait.

This outcome revealed a range of tolerance levels within the group, with some animals consistently relaxed in the presence of observers whilst others remained more apprehensive, despite subjects being habituated for well over a decade.

This research challenges long-held notions of habituation and instead demonstrates that individual baboons have a tolerance trait.

If present at other field sites or in other species, our researchers say their findings could have far-reaching implications for behavioural research in the future.