How water could trigger earthquakes and volcanoes 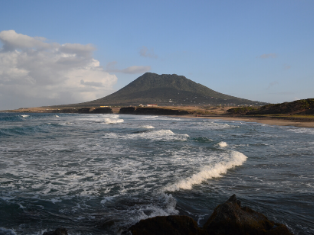 We’re investigating if water cycles deep in the Earth play a role in the triggering and strength of earthquakes and volcanoes.

Our researchers studied the movements of tectonic plates in the Caribbean Sea to understand the effect of the water cycle in subduction zones - where tectonic plates meet and one sinks beneath another.

When tectonic plates move seawater enters the plate rock through cracks, faults and by attaching to minerals. When they meet, the sinking plate heats up and gradually releases water below the arc of volcanoes sitting above.

Studies showed there was a high amount of the water-rich mineral serpentine in the sinking plate, and the water released formed part of the main supply to the central region of the Lesser Antilles volcanic arc.

Water passing in and out of the plate is directly connected to patterns of boiling hot magma production and earthquakes in the Lesser Antilles area, the researchers found.

Further research will help us understand how this pattern might also trigger larger earthquakes and tsunamis.

The next stage of this research will combine modelling the chemical and physical make-up of the Earth.

The data will be used to produce detailed maps of subduction zone activity to better understand the potential of large earthquakes and other natural hazards.