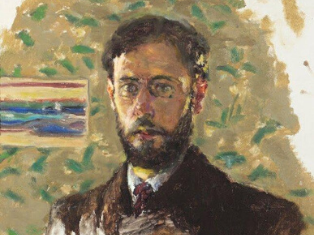 The mystery behind a painting by a renowned French post-impressionist may have been revealed by new research that has unearthed secrets from his past.

Research by our School of Modern Languages and Cultures has given us a new understanding of Pierre Bonnard’s relationship with his wife and model Marthe Bonnard, and explains some of the negative stories about her after her death.

It could also shed light on one of his paintings that has long puzzled art historians, called ‘Man and Woman’.

History reports that Marthe met Bonnard in 1893, and it has long been assumed that she was the artist’s constant muse until her death in 1942. According to Dr Lucy Whelan’s research, this may not have been the truth.

After contacting an archivist from the central Loire Valley, where Marthe spent her childhood, Lucy uncovered documents that suggest an entirely different shape to Bonnard and Marthe’s life, including evidence that she was not the ever-constant model and muse that has long been imagined.

Amongst other things, the research found that Marthe signed herself as ‘Madame Renard’, and ‘wife of Renard’ on her brother’s death certificate in 1899, suggesting she was married to another man, following which she almost totally disappeared from Bonnard’s work for several years.

This finding explains one of Pierre Bonnard’s paintings from that time period. Titled ‘Man and Woman’, the space between the pair is dramatically split by a screen in a style which had not been seen previously.

Bonnard’s subsequent works and sketchbook-diaries give further credence to these findings as Marthe all but vanished for a period of several years, only gradually returning to his work around 1905.

Lucy’s research also discovered documents about Marthe’s early life that gives new insight into her reputed troubled mental health, and shows how many negative stories about her were possibly false as they came from Bonnard’s family following a bitter legal dispute with her heirs over his estate.