VE day and national thanksgiving in 1945 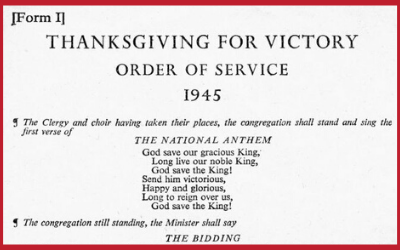 After Victory in Europe Day (VE Day) on 8 May 1945, thanksgiving services were held in churches throughout Britain and overseas. Philip Williamson, Professor of Modern History, reveals the meticulous planning that went on behind the scenes.

Photographs and newsreels of the day show a great outburst of spontaneous celebrations. But these could not take place without careful plans.

Six months earlier, committees of civil servants and government ministers had begun detailed preparations for press announcements, broadcasts, ceremonies and suspensions of military action and war production. As well as public holidays on VE Day (a Tuesday) and the following day, religious thanksgivings were regarded as integral to the celebrations.

Both houses of parliament had special thanksgiving services on VE Day itself. A day of religious thanksgiving took place on Sunday, 13 May, with services organised by all the churches and religious bodies throughout the United Kingdom, the Commonwealth and the colonies, and special services broadcast on BBC radio.

Newspapers reported that during the day of thanksgiving all churches had crowded congregations.

Thanksgivings and prayers in the Church of England

The Church of England began preparations even earlier than the government. A committee considered an idea from Archbishop Temple that the special services for use in all the Church’s places of worship should stress repentance as well as thanksgiving, to emphasise the challenge of domestic and international reconstruction. But the committee thought that this would puzzle congregations, and instead produced prayers of thanksgiving to be used on VE Day itself and the following days, as well as a full service for the day of thanksgiving.

Publishing the special service for distribution to churches and congregations was hindered by wartime paper shortages. The Church asked for 5 million copies to be printed, but the government would only supply enough paper for 2 million copies, all in small print.

But as the likely scale of the celebrations became clearer the restriction was relaxed and more paper was supplied to enable many more copies, with larger print and a better design.
There was also the problem that the Second World War would not yet have ended: many Britons continued to fight against Japanese forces in the Far East. So the Church also published further prayers of intercession for British and allied troops, to be used until the Japanese defeat.

The national service and the final end of the war

King George VI wanted the national service in St Paul’s Cathedral in the City of London, to be a joyous occasion in which the congregation could participate as much as possible. He rejected the first draft offered by the Cathedral, asking for the inclusion of popular hymns.
This service was broadcast across the world, as well as in Britain. The government arrangements and the Cathedral and the general Church of England services were repeated when the war finally ended, on Victory over Japan Day (VJ Day), Wednesday 15 August 1945, with another day of thanksgiving on the following Sunday, 19 August.

Philip Williamson is a professor of Modern History in our Department of History. He is chief editor of a volume on special worship for national and royal occasions to be published in late May.

Watch our Vice-Chancellor, civic and military leaders send a personal message of thanks to mark the 75th anniversary of VE Day here.