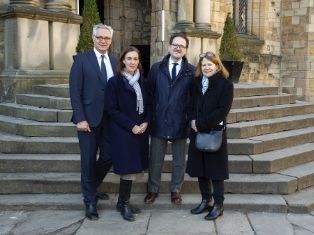 Our work to help bring the vast wealth of Spanish art and culture to the world has been marked by a visit from Spain’s Consul General.

Ignacio Cartagena Núñez met our experts in Spanish and Latin American art and Hispanic Studies and discovered more about the work we’re doing.

Through the Zurbarán Centre for Spanish and Latin American Art we’ve brought together experts from around the world to showcase this rich culture to international audiences.

Almost 45,000 visitors have attended exhibitions in London and Mexico City informed by our research and global connections.

We’ve also curated the first exhibition in the UK on Jusepe de Ribera at the Dulwich Picture Gallery in London and accompanied the Zurbarán paintings at Auckland Castle in their tour to the United States.

He then travelled to Bishop Auckland to visit the Zurbarán Centre and our partners at The Auckland Project arts and culture led charity and visitor destination, where he saw the series of paintings by illustrious Spanish master Francisco de Zurbarán at Auckland Castle.

Durham has a proud history of research and teaching in Spanish and Latin American art, language and culture.

Our research has led to a series of international events dedicated to the work of celebrated Spanish film director Bigas Luna with nearly 70 screenings in 15 cities across seven countries including Spain, the USA, Australia, Mexico and Costa Rica.

For the past five years, our Department of Hispanic Studies has been ranked as the second Iberian Languages department in the UK, according to the Complete University Guide.

And our students benefit from the world-leading research carried out in Hispanic Studies, and from a year abroad in which study and work placements enable them to develop their skills and employability while absorbing the cultures of Spain and Latin American countries.