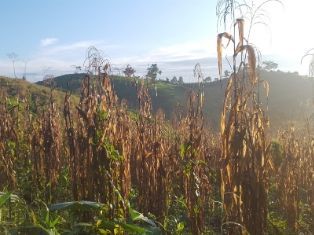 Working with scientists around the world, we’ve found that the Intertropical Convergence Zone (ITCZ) could shrink as global temperatures increase.

The ITCZ is a critical rainfall belt found near the equator and the researchers believe that a change in its patterns caused by climate change could lead to droughts in the northern tropics.

They say that this could affect agriculture production and cause social unrest and mass migration from affected regions, including Central America and sub-Saharan Africa.

Seasonal shifts in the ITCZ’s location control the beginning and length of the tropical rainy season, and in turn, the agricultural growing season.

The researchers reconstructed 1,600 years of rainfall using a stalagmite recovered from a cave in Belize, Central America, and compared this with existing rainfall data from other locations.

They found that the ITCZ expands in a cooler climate and contracts or shrinks as temperatures increase.

As a result, areas of the northern tropics, like Central America, could experience drier conditions, leading to crop failure and possible famine, if the world’s climate continues to warm.

The researchers say that the next step is to investigate how expansion and contraction is linked to other major climate systems like the Asian-Australian monsoon.