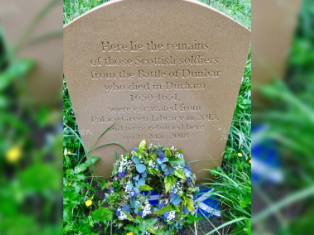 The headstone has been installed at the grave of the 17th Century Scottish soldiers buried in Durham City, providing a permanent marker of their resting place.

The remains of the soldiers were discovered in a mass grave during building work at the University’s Palace Green Library in 2013. In keeping with archaeological best practice, only those remains disturbed by the building works were excavated.

Carved by hand using local stone, the headstone has been designed in the tradition of the 17th Century.

The wording on the stone was chosen following extensive consultation and reads:

‘Here lie the remains of those Scottish soldiers from the Battle of Dunbar who died in Durham 1650-51, were excavated from Palace Green Library in 2013, and were reburied here on 18 May 2018’.

Following extensive consultation, the remains were laid to rest in Elvet Hill Road Cemetery in Durham City in May 2018.

Research led by our Department of Archaeology allowed us to confirm that the remains were those of Scottish soldiers, held prisoner in Durham after the Battle of Dunbar in 1650.

The research answered a mystery of almost 400 years as to where the soldiers’ remains had been buried.

The headstone provides a dignified and fitting marker for the grave, and somewhere that visitors can come to pay their respects.

The University also unveiled a plaque in 2017, dedicated to the soldiers, in the courtyard café of Palace Green Library, where their remains were discovered during construction work in 2013.

Research on the remains has provided fascinating insights into the lives of the soldiers, and is currently the subject of a free online course developed by the archaeologists who had dedicated their skills to discovering the stories of these men.