Does Santa need a passport? 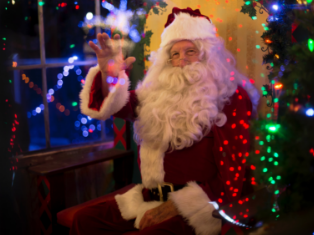 We all know that Santa Claus lives at the North Pole. But what is his citizenship? Who collects taxes from the elves’ workshop? And how is this all being affected by climate change?

These are some of the questions being asked by Geography Professor Philip Steinberg, Director of IBRU: Durham’s Centre for Borders Research and the ICE LAW Project, a research network that investigates the hurdles encountered when international law is applied to frozen environments.

We caught up with Professor Steinberg just before Christmas to ask him a few questions.

What country controls the North Pole?

The simple answer is: No one. Or maybe everyone. The North Pole isn’t land; it’s ocean. And since it’s located more than 200 miles from the nearest bit of land no country has special rights to it or to the fish in its waters. The Arctic Ocean, including the North Pole, is considered part of the High Seas, a global commons where no country is in charge.

Thus Santa, one might say, is a citizen of the world, which seems kind of fitting.

So anything goes at the North Pole?

Not exactly. In fact, just two months ago, the world’s Arctic countries as well as major fishing powers signed an agreement to ban fishing in the Arctic Ocean until more is known about its ecosystem.

Also, although the High Seas is a global commons, under some conditions adjacent states can claim exclusive rights to seabed resources. This claims-making process is happening now, and it could become increasingly relevant as Arctic ice melts amidst climate change.

What are the legal questions at the North Pole then?

Officially, under international law, it doesn’t matter that the ocean at the North Pole is frozen. But if you actually encounter that ice – as an oil driller, or a polar bear, or an indigenous hunter, or, for that matter, as the owner of a multinational toy manufacturing and distribution enterprise – it makes a huge difference.

That’s why the ICE LAW Project is researching how law changes, in practice, when it is applied in frigid regions, and how that law can adapt as the region’s environment changes.