Honouring the physicists of the future 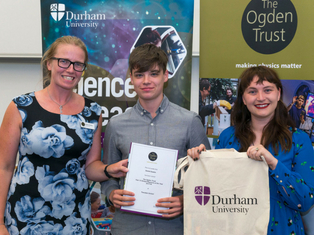 Daniel Gaskin receives his award from Charley Phillips, from the Ogden Trust, and Steph Bartle, from Durham University

Durham University has honoured the next generation of scientists at its annual Schools Physicist of the Year awards.

Thirty-nine talented young physicists from schools and colleges across North East England were nominated for the awards by their teachers, who selected students based on their hard work, contributions in class and progress over the past year.

The award-winning students, along with their families and teachers, attended a celebratory ceremony at the University’s Calman Learning Centre.

Dr Peter Edwards, the University’s Director of Science Outreach, said: “As a University, we see it as part of our purpose to stimulate interest in science and encourage better understanding of the application of science to our everyday lives.

“It was a pleasure to welcome so many talented young scientists to the University to celebrate their hard work, progress and attitude in the Schools Physicist of the Year Awards. My congratulations go to all the winners.”

Role model for others

One of the winners was Daniel Gaskin, from Teesdale School and Sixth Form, Barnard Castle, County Durham.

Abigail Hope, Head of Physics at Teesdale School and Sixth Form, said: “Dan is always modest in his achievements and this is a wonderful opportunity for us to tell him how privileged we feel to teach him. We could not ask for a better role model than Dan.”

The awards were presented by Steph Bartle, a PhD student in the Department of Physics who is a former pupil of Framwellgate School Durham.

Ms Bartle said: “I was incredibly humbled to present the awards as my old physics teacher Ian Tippey, was there with one of the award winners. It was a delight to be able to tell him that he was the reason I chose to study physics to such a level; he really inspired me and encouraged my passion of physics.

“It was such an amazing night to see these students so engaged and enthused with physics.”

The awards, which were held on Tuesday 19 June, are supported by the Ogden Trust, which aims to increase the uptake of physics in post-16 education, particularly for those from under-represented groups.