Discovering how humans can see with sound 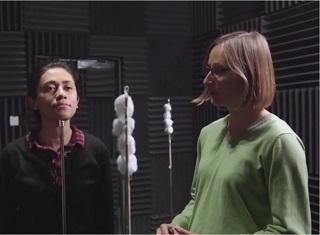 Human echolocation enables people to ‘see’ with their ears and build a picture of the world around them. The technique involves making sharp mouth clicks and then translating the sound reflected by surrounding objects into spatial information – a method also used by whales, dolphins and bats.

Dr Lore Thaler, Associate Professor in the Psychology Department, studies the way expert echolocators use the technique and her recent research shows that echolocators make louder or sharper clicks in order to see behind them. She discussed her latest research on In Touch, BBC Radio 4's programme for people who are blind and partially sighted - the programme can be heard here.

We caught up with her to find out how she carries out her research with expert human echolocators and how the research findings are being used.

What drew you to study human echolocation?

Back in 2009 I was a postdoctoral student at Western University in Ontario, Canada where I was researching visual perception. My adviser suggested I look at Human Echolocation, which was something I had never heard of. I found some YouTube videos of Daniel Kish, an American expert in human echolocation and the President of World Access for the Blind, and it was amazing. I wanted to get a better understanding of this technique so we made contact with Daniel. Our first project involved neuroimaging of human echolocation and our first paper was published in 2011. I moved to Durham not long after this and one of the first things I set out to do was create facilities that would enable me to continue my research.

What did this entail?

Part of my research requires a space that is acoustically sound-proof and echo-absorbent. This is needed so that when we measure or work with sound and echoes, we have no interference from external noise or from echoes from the room itself. Initially I improvised by installing a garden gazebo in a regular room, which I covered with lots and lots of fleecy blankets because fleece absorbs sound. It took me three years but I now have a facility which has a heavy steel door and extra thick walls lined with foam - a sound-dampening material - which means the space is acoustically well controlled.

I also have equipment suitable to record relevant sound at high quality, for example a number of tiny microphones and calibration equipment, some of which I purchased after winning a Dragon’s Den type event put on by the Biophysical Sciences Institute. The room is used to record and measure mouth-clicks and echoes produced by expert echolocators or loudspeakers in the context of various tasks. We analyse the recordings and also use them in brain imaging experiments which we run at the James Cook Hospital in Middlesbrough. Durham University has an MR scanner there, which captures 3D images of the brain. I use it to measure the brain activity of participants as they listen to the recordings of echolocation scenes and sounds.

What has your research revealed?

We now know that echolocators have adapted visual parts of their brain to process sound echoes. We also have a much better understanding of the abilities of expert echolocators and how they fine-tune their techniques. For example, we thought that the acoustic properties of mouth-clicks would vary between echolocators but the noises they produce are very similar. We’ve recently identified the extent to which echolocators adjust their clicks in response to variations in their surroundings, for example louder clicks allow echolocators to ‘see’ behind them.

We have used this information to develop effective methods for teaching echolocation and we are running training courses for visual impairment mobility specialists and their clients. More details about these workshops can be found here.

What else do you hope your research will demonstrate?

I’m keen to see how learning echolocation can change the brain. We have observed changes in the brains of expert echolocators, which are consistent with our understanding that the brain is an organ that reorganises itself. We will teach the technique to people, both sighted and blind, who are completely new to echolocation and follow them over a period of time to observe how their brains change. We want to know if learning echolocation actually leads to the changes we have observed in the brains of expert echolocators.