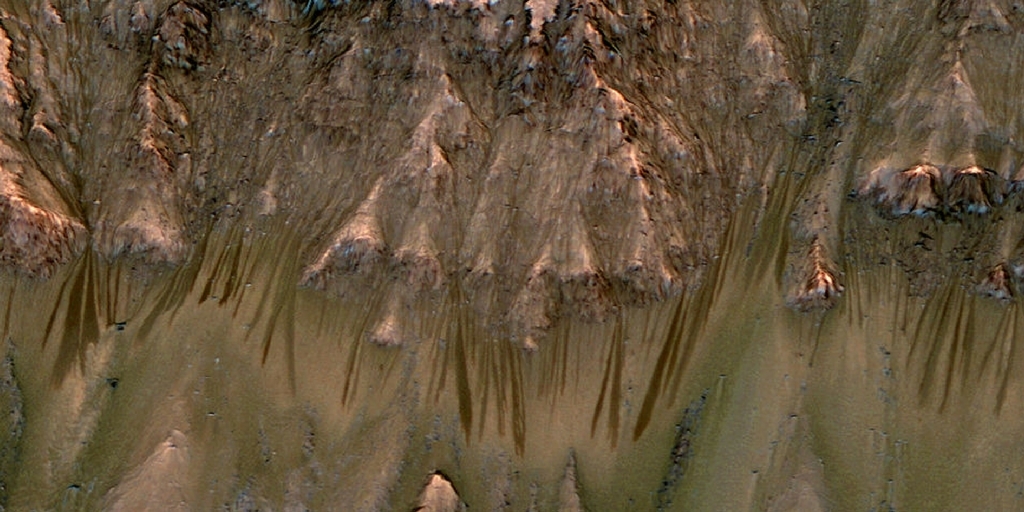 The wall of the Newton Crater on Mars. The dark thick lines spread out horizontally in the picture while the Recurring Slope Lineae run downwards. Credit C. Dundas NASA/JPL/USGS

Dark features previously proposed as evidence for significant liquid water flowing on Mars have now been identified as granular flows, where sand and dust move rather than liquid water, according to a new study.

The new findings, involving scientists at Durham University, the US Geological Survey (USGS), the University of Arizona, and the Planetary Science Institute indicate that present-day Mars may not have a significant volume of liquid water.

The water-restricted conditions that exist on Mars would make it difficult for Earth-like life to exist near the surface of the planet.

The research is published in Nature Geoscience

Scientists analysed narrow, down-slope trending surface features on Mars that are darker than their surroundings, called Recurring Slope Lineae, or RSL. These RSL features grow incrementally, fade when inactive and recur annually during the warmest time of year on Mars.

RSL are mostly found on steep rocky slopes in dark regions of Mars, such as the southern mid-latitudes, Valles Marineris near the equator, and in Acidalia Planitia on the northern plains.

The appearance and growth of these features resemble seeping liquid water, but how they form remains unclear, and this research demonstrated that the RSL flows seen by HiRISE are likely moving granular material like sand and dust.

Professor Jim McElwaine, Professor of Geohazards, in the Department of Earth Sciences, at Durham University and a specialist in granular physics and fluid dynamics, played a key role in the research project, studying granular avalanches – small scale events such as grains of sand rolling down a sand dune.

Professor McElwaine said: “Planetary science researchers have previously believed that once a granular avalanche has started it will keep flowing until the slope gets gentler. Some have also argued that a specific cause is necessary for a granular avalanche to start. However, my research suggests this is incorrect and therefore grains of sand could cause the lines we see on the surface of Mars.

“I have shown experimentally in the lab that if grains are slowly deposited on a uniform slope there will be small avalanches with no specific cause. These will move down between the same levees and extend the deposit pattern before stopping.

“In addition, we have explained the colouring patterns seen in the Mars levees as possibly due to different size grains of a different colour moving to the surface of the flow, a phenomenon known as the Brazil nut effect.”

Lead author Colin Dundas, at the USGS, added: “We’ve thought of RSL as possible liquid water flows, but the slopes are more like what we expect for dry sand.

“This new understanding of RSL supports other evidence that shows that Mars today is very dry.”

The terminal end of the RSL slopes, said Dundas, are identical to the slopes of sand dunes where movement is caused by dry granular flows. Water almost certainly is not responsible for this behaviour, which would require the volume of liquid to correspond to the length of slope available, producing more liquid on longer slopes.

Instead, the 151 RSL examined by the study authors all end on similar slopes despite very different lengths. Additionally, said the scientists, water is unlikely to be produced only near the tops of slopes at these angles and if it were, it should be able to flow onto lower slopes.

This new research finds that these RSL features are flows of granular material and thus, align with the long-standing hypothesis that the surface of Mars lacks flowing water. Small amounts of water could still be involved in their initiation in some fashion, as hydrated minerals have been detected at some RSL locations. The authors conclude that liquid on present-day Mars may be limited to traces of dissolved moisture from the atmosphere and thin films of water.

This study was done in cooperation with the NASA Mars Reconnaissance Orbiter project.