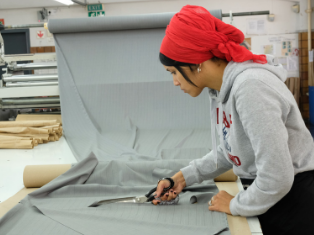 According to the UN’s International Labour Organization (ILO), only one quarter of workers worldwide has a stable employment relationship.

So how can we protect the world’s workers from the threat of exploitation?

A Durham Law School professor is pioneering research into how regulatory change, policy innovation and community involvement can improve the quality of work for millions around the world.

The Unacceptable Forms of Work project is a collaboration with truly global reach. Kick-started in 2015 by Durham Law School's Professor Deirdre McCann, Professor Judy Fudge of the University of Kent, and Dr Sangheon Lee of the ILO, it initially reported on the various dimensions that make work unacceptable.

The project moved on in 2017, with funding from the UK Economic and Social Research Council,to build a strategic network that is investigating legal solutions to unacceptable work on a global scale. September marked completion of the second of two international workshops focused on regulatory and policy innovations that could help eradicate unacceptable working conditions for people around the world. The ‘Global Dialogue/Local Innovation’ conferences, held in Bangkok and Durham, hosted researchers, policy-makers and union members representing a diverse range of countries, including Australia, Korea, Brazil, South Africa, Lesotho, India, Vietnam, Cambodia, and the UK.

The struggle for fair and safe employment is an urgent concern for millions around the world. So how does this project hope to help?

Q: What are unacceptable forms of work?

The ILO defines an "unacceptable form of work" as work "in conditions that deny fundamental principles and rights at work, put at risk the lives, health, freedom, human dignity and security of workers, or keep households in conditions of extreme poverty".

In their 2015 report for the ILO, Professors Deirdre McCann and Judy Fudge identified 12 distinct dimensions of Unacceptable Forms of Work. These dimensions include forced labour, poor health and safety, low incomes, unpredictable schedules, excessive hours, a lack of union representation, limited access to pensions and healthcare, discrimination, lack of legal protection, excessive workload and lack of time for workers to spend with their families. This report also stressed that it is crucial to involve local policy-makers and researchers in identifying unacceptable work in their local contexts and in finding the legal strategies that can upgrade or eliminate these forms of work.

Here we answer some key questions about this project.

Q: How widespread is this problem?

Unacceptable work is a dominant aspect of working life in developing economies; however, it is not a problem confined to the developing world. The "standard" model of employment - in which employees work full-time and have stable jobs - has become far less prevalent in Western economies due to increasing de-regulation and casualization of labour markets.

In a 2015 report, the ILO stated that fewer than 45 per cent of wage and salaried workers were employed on a full-time, permanent basis. This drops to as few as 20 per cent of workers in sub-Saharan Africa and South Asia. Even developed Western countries have become familiar in recent years with terms such as "zero hours contracts" and the "gig economy".

Q: So what’s wrong with self-employment?

The project emphasises that the problem isn't necessarily the type of employment: it is the conditions that workers experience. In many countries, non-standard employment can offer better access to opportunities. However, the lack of protection associated with these working arrangements can give rise to problems such as unpaid overtime, and a lack of union representation. The Unacceptable Forms of Work project aims to address these labour problems wherever they occur.

Q: So how can this project help?

The ILO has identified the struggle against unfair labour practices as one of its major challenges in the 21st century. The United Nations has included "Decent Work" among its 17 Sustainable Development Goals for the next 15 years.

The Unacceptable Forms of Work project stresses that effective regulation is integral to securing sustainable development. In the current phase of the project, a global network of researchers and policy-makers is identifying key locations in which unacceptable work is prominent and looking at how creative regulation and flexible strategies such as collective bargaining can improve working conditions in the long term.

Q: Who is involved?

This project draws on the experience and expertise of researchers, organisers and policy-makers from around the world, to discuss and discover innovative and effective approaches to these problems. Some of these strategies are already being used in communities in different countries; others have still to be tested.

It is driven by a team of three lead researchers. Deirdre McCann is a Professor of Law and Policy at Durham Law School. A former official of the International Labour Office in Geneva, she has experience in advising governments and organisations on law and policy.

The University of Kent's Judy Fudge was elected to the Society of Canada in 2013 in recognition of her work in labour law scholarship. She has authored a wide range of publications including Challenging the Legal Boundaries of Work Regulation (2012)and Precarious Work, Women, and the New Economy (2006).

Dr Sangheon Lee is the Acting Head of the Research Department at the International Labour Office in Geneva. He has written extensively on the regulation of Unacceptable Forms of Work and specialises in monitoring changes in wages and working conditions worldwide.

Q: How is the project being organised?

The UFW team has selected a number of key challenges to effective labour regulation that urgently need to be addressed. These Global Challenges include the need to preserve labour rights in ‘precarious economies,’ recruitment strategies in global value chains that generate unacceptable work, the growth of casual work across the world, and constraints on legal frameworks on wages and working hours. The project is assessing how two or more countries at different income levels address each challenge. This approach will enable the team to highlight effective approaches that could be applied elsewhere at a local or international level.

For example one of the research team, Shelley Marshall (RMIT, Australia) is studying the "Mathadi Boards" that were set up in the late '60s in India to protect headload workers. Could these Boards offer a solution for better protecting ‘gig economy’ workers in western countries? Another group of researchers led by Nik Theodore (University of Illinois at Chicago) is comparing the legal treatment of casual workers in cities in South Africa and the US.

Q: What is the long term aim?

The ultimate aim of the project is to encourage global researchers and policy-makers to work together to discover new and effective ways to protect workers, both in the developing and developed worlds.

The UFW project involves experts from countries as diverse as the USA, India, Korea, South Africa, Vietnam and Australia. While regulation is rarely ‘one-size-fits-all,’ knowledge of the interventions that are being tested in countries across the world can provide valuable inspiration. In this initial phase, the UFW project is building a network to address this global challenge.

For more information on the Unacceptable Forms of Work project, go to www.unacceptablework.com