Women have to ‘prove they are sports fans’ 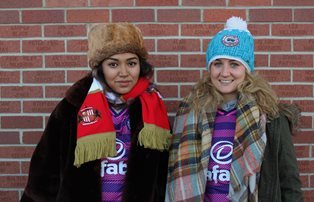 Female sports fans struggle to be taken seriously and feel they are regarded as being less committed than male fans, according to research by Dr Stacey Pope, who answers some questions about her findings below.

How is the experience of female sports fans different to that of their male counterparts?

I have looked at the experience of female football and rugby fans and it’s not a level playing field when it comes to being a supporter. Female football and rugby union fans in my research say how they have to routinely ‘prove’ their status as ‘real’ fans – usually to male supporters. Common stereotypes of female sports fans have included that they lack sporting knowledge, are only interested in the sexual attractiveness of (male) star players and are not as passionate or committed as male fans. Media coverage also typically represents women in subordinate ways; for example, a cursory internet search for ‘female fans’ brings up numerous sexualised images, doing little to challenge the perceptions of women as inferior sports fans.

How much research has been carried out on the subject of female sports fans?

Perhaps this is partly as a result of popular assumptions and stereotypes of female fans, but very little research has examined women’s experiences as sports fans. Most studies have focused exclusively on male supporters and issues of fan rivalry or hooliganism, despite the minority of fans involved in fan violence in many countries.

My work tackles head-on the lack of research on female sports fans. It also challenges the perceptions of women as inauthentic or inferior fans in comparison to male ‘authentic’ or ‘real’ supporters.

How did you carry out your research and what did you find out?

I drew on 85 in-depth interviews with football and rugby union fans from three generations in one area in the UK (Leicester). I found that sport plays a hugely important role in the lives and identities of many female fans. The research challenges popular and academic assumptions that sport only plays an important role in the lives of male fans, and claims that males are more likely to identify with being a fan and have higher levels of sporting knowledge.

What came through the research was two female fan types: dedicated or highly committed ‘hot’ female fans and more casual ‘cool’ fans. Nearly 85% of the football fans (43 out of 51) and just under half of the rugby union fans (16 out of 34) could best be described as ‘hot’ sports fans. Of course, within the continuum between ‘hot’ and ‘cool’ there were also varying levels of fan attachment. There were no obvious generational distinctions, except that ‘older’ football fans were more likely to fit the ‘hot’ fan category than ‘older’ rugby fans.

What role does sport play in the daily lives of the dedicated female fans?

For the dedicated ‘hot’ fans, sport was an important aspect of their identity. These ‘hot’ fans mention their support for their club or make a conscious effort to tell people about their affiliation to the club. These female fans invested large amounts of time watching or thinking about sport, with some of the extreme ‘hot’ fans confessing to thinking about sport or their club ‘constantly’. The sport/sports club was an important part of who they are, for example, in the words of one female football fan:

For female rugby union fans, sport also played a critical role in their everyday lives, with many drawing on the family to illustrate the importance that the club held for them, for example:

“In order of priority it’s sort of, it’s (Leicester) Tigers and then it’s my other half and then it’s the kids and the grandkids, you know, and everybody, they all know it. They’ve been told that that’s the order of importance” (Julia, age 68, season ticket holder).

How else does their dedication to their club affect them?

As you can imagine, match day results produced extremes in terms of emotional responses! Given the amount of time that ‘hot’ fans devote to their clubs and the impact results usually had on their mood, relations with close relatives were also affected. For example, because the club formed such a significant part of their lives, organising other activities became extremely complicated, with some describing how family weddings needed to be planned carefully not to coincide with football. Some of the intense ‘hot’ football fans also confessed that they could not enter a relationship with a supporter who did not follow the same club. As one female fan put it:

“It’s a big part of my life, and if he can’t accept me as a Leicester fan then I’m afraid I don’t want to know you, sort of thing” (Deborah, age 51, member).

Many ‘hot’ female fans also had rooms or even a home dressed in club colours and products, with some of the football women sporting tattoos of the club to demonstrate their allegiance.

For the smaller number of ‘cool’ female fans, sport did not impact upon their lives in the same manner. Sport was viewed more as a ‘hobby’ or form of ‘entertainment’ – a leisure choice or “just one of the things I do in my spare time” (Adaline, age 62, season ticket holder).

‘Cool’ fans did not spend much time watching or thinking about sport in the week, and the club was not typically important enough for them to be affected by match results.

Whilst some female fans were fairly rooted as ‘hot’ or ‘cool’ female fans, the typical heterosexual life cycle also meant that in some cases there was some shifting between the ‘hot’ and ‘cool’ nodes, and having children was one of the main factors which affected this movement. This reflects wider gendered inequalities in access to leisure, with women continuing to be overwhelmingly responsible for childcare and looking after the housework.

It is clear that there is a huge diversity of female supporter styles, and that there is a need to move away from distinctions between males as ‘authentic’ and ‘real’ supporters and females as ‘inauthentic’ or not ‘real’ fans. These findings are set against the backdrop of football and rugby union being perceived as very male-dominated, despite one-quarter of football Premier League fans being female, for example.

But surely it is now time for women to be taken seriously as fans, moving away from common stereotypes of female supporters which women frequently have to challenge to ‘prove’ their fan status, and for media coverage to display a range of ordinary or ‘everyday’ female fans rather than typically focusing on those women who are young, conventionally attractive and often highly sexualised.

Dr Stacey Pope, Associate Professor in the School of Applied Social Sciences, concentrates on issues of gender inequality and sport. Her book The Feminization of Sports Fandom: A Sociological Study was published last month.

Images accompanying this article are from the blog, This Fan Girl, an ongoing project to create a visual documentary of women who support football.