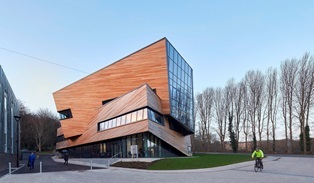 The Ogden Centre for Fundamental Physics

Durham University has reaffirmed its position as a world leading centre of research in astronomy and cosmology with the opening of the new £11.5m Ogden Centre for Fundamental Physics.

The centre will house an international team of researchers investigating the mysteries of the cosmos, from the birth of the Universe through to the origin of galaxies, to the nature of dark matter and dark energy.

The building has been designed by the internationally renowned Studio Libeskind, the architectural practice behind the master plan for the World Trade Center redevelopment in New York.

The centre’s opening will be celebrated on Thursday, 9 March, with a series of talks from leading figures including architect Daniel Libeskind, Lord Martin Rees, the Astronomer Royal, and prominent astrophysicists Professors Hiranya Peiris, Mark Hannam and Carlos Frenk.

Lord Rees will unveil a plaque commemorating the official opening of the centre on South Road, Durham City, UK, on Friday, 10 March.

The new Ogden Centre for Fundamental Physics will house Durham University’s Institute for Computational Cosmology (ICC), the Centre for Extragalactic Astronomy (CEA) and the Centre for Advanced Instrumentation (CfAI).

The development was made possible thanks to generous donations of £3.35m from The Ogden Trust, whose Chairman is Durham physics alumnus and entrepreneur Sir Peter Ogden, £1.5m from The Wolfson Foundation and a further £900,000 from a private benefactor. Additional funding was provided by Durham University.

The building will house 140 staff, including academics, postdoctoral researchers, PhD students and support staff, in 80 offices.

Furthering our understanding of the Universe

Durham University is one of the world’s foremost research centres in space science and the new Ogden Centre for Fundamental Physics will help strengthen this position.

Scientists from more than 20 countries around the world are involved in some of today’s biggest research projects aimed at furthering our understanding of the Universe.

ICC researchers carry out supercomputer simulations of the evolution of the Universe, which by solving equations from Physics and including dark matter and dark energy, track the formation of cosmic structures from the Big Bang to the present day. Under certain conditions, they produce galaxy populations that closely resemble those in the real world.

The CEA leads observational studies of the formation and evolution of galaxies and massive black holes, and the growth of large scale structure across the whole history of the Universe. These studies exploit data from the largest ground and space-based telescopes and wide-field surveys of galaxies and Quasars to understand how the Universe we see today came into being.

Researchers within the CfAI support these activities through the development of novel and innovative instrumentation for ground and space-based telescopes (including the new European Extremely Large Telescope in Chile) using facilities both in Durham and at the NETpark technology park near Sedgefield, County Durham.

As well as providing a new home for the ICC, CEA and CfAI, the new building has also freed up space for Durham’s Institute for Particle Physics Phenomenology (IPPP), a leading research centre into particle physics. The IPPP is part of the Ogden Centre for Fundamental Physics and will remain in the building next door to the new development that it once shared with the ICC.

“A sense of adventure”

The research carried out at the Ogden Centre (including the IPPP) forms the basis of a vigorous regional and national outreach programme undertaken by the Centre’s researchers to support public engagement in science in schools and the wider community.

Professor Carlos Frenk, Director of the Institute for Computational Cosmology, at Durham University, said: “The new Ogden Centre for Fundamental Physics represents a wonderful contribution to the unique architectural heritage of Durham City.

“Its design fits the requirements of a top-class research centre, dedicated to seeking answers to some of the most fundamental questions about our Universe such as: How and when did our Universe begin? What is it made of? How did galaxies and other structures form?

“The new building conveys a sense of adventure that reflects the novelty and excitement of the research that goes on within it. It is an amazing place in which to work.”

Studio Libeskind was appointed to design the new building following an international competition. Building work was carried out by the North-East of England regional office of Interserve, the international support services and construction group, sustaining some 250 construction-related jobs and involving a supply chain predominantly drawn from the local area.

The Centre is a spiral, designed as continuous, stacked and interlocking forms, clad in responsibly sourced Scottish larch. It provides spectacular views of picturesque Durham City and Durham Cathedral.

Along with office space, the building also houses a 100 seat seminar and meeting room, a central social space for informal research working, and breakout rooms with video conferencing to cater for international collaboration.

Sustainability is an important part of the building which includes rain-water harvesting, a ground-source heat pump and solar panels to provide electricity.

The Centre also houses a collection of sculptures by artist John Robinson, gifted to the University by benefactor Damon de Laszlo.

The building was recently awarded the City of Durham Trust Architectural Award for 2016.

Architect Daniel Libeskind said: “This project is an example of how to design a highly-sustainable, dynamic building within tight programme requirements.

“Light and openness is at the core of the design; at every move in the design process we incorporated simple, yet robust materials and considered the users’ experience to create this important building for Durham University.”

* The opening celebrations for the new Ogden Centre for Fundamental Physics will also see a public showing of multi-media projection Worlds, Systems & Creations which will be projected on to the side of the new building.

The projection will be open to the public on Thursday 9, Friday 10, and Saturday 11 March, 6.30pm to 8.30pm. Each showing lasts eight minutes and there will be six showings an hour.

On Friday 10 and Saturday 11 March, at the same time as the projection, visitors will also be able to learn more about the Universe through a series of outreach activities in the nearby Dawson Building, on Lower Mountjoy.

Activities include the chance to build a Universe with the Universe Creator, take a virtual reality "Tour of the Cosmos" and watch the 3-D movie Cosmic Origins; created by the Institute for Computational Cosmology. More details can be found here.