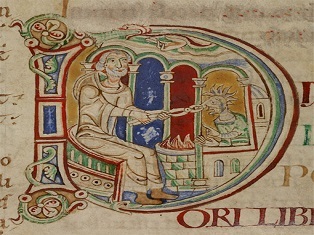 Although voice-hearing is often associated with severe mental illness, it can be an important aspect of people’s religious or spiritual life.

This is an area explored in the world’s first major exhibition on hearing voices which enters its final month (February) at Durham University’s Palace Green Library.

Hearing Voices: suffering, inspiration and the everyday is the first exhibition of its kind to examine voice-hearing from different cultural, clinical, historical, literary and spiritual perspectives.

The exhibition is informed by research from Durham University’s Hearing the Voice project, an interdisciplinary research project funded by the Wellcome Trust, which is leading the way in examining the spiritual aspects of voice-hearing.

Dr Angela Woods, co-director of Hearing the Voice at Durham University and academic lead for the exhibition, said: “This exhibition sheds new light on a much maligned and commonly misunderstood experience. Many people immediately link voice-hearing with particular forms of distress or psychiatric diagnoses, but 5-15 per cent of the general population will have occasional or fleeting occurrences of hearing voices.

“This exhibition shows that there are many different types of voices rich with personal, cultural, religious and historical significance.”

With material spanning seven centuries, visitors can explore the spiritual significance of hearing voices, and the way in which voice-hearing has been interpreted and represented in different religious contexts from the medieval period to the present day.

The exhibition includes the only surviving original manuscript of Julian of Norwich’s short text of Revelations of Divine Love (early 15th Century), on loan from the British Library for the first time. Julian of Norwich was an English anchoress and an important Christian mystic and theologian. Revelations of Divine Love is the first book in English to have been authored by a woman.

Also on show is the early 12th century Canterbury Passionale, showing details from the life of the 10th century saint Dunstan, including his experiences of dreams and visions.

During February, international experts will headline a series of events in Durham exploring the links between hearing voices and spirituality in a range of religious traditions.

They will investigate the spiritual voices and visions of medieval visionaries including Julian of Norwich, whose Revelations of Divine Love retains a powerful influence today; the French saint Joan of Arc, whose voices inspired her to lead an army; and Margery Kempe, author of the first autobiography in English.

They will also explore voice-hearing in wider religious contexts, such as early Mormonism, Buddhism and ayahuasca rituals.

Between 11 and 25 February, Durham Cathedral’s Chapel of the Holy Cross will be home to “Tuning in to the Light”, an audio installation by artists Nina Garthwaite exploring the experience of hearing spiritual voices. Sound, music and silence will all combine in the work, which also incorporates accounts of mystical and ecstatic experiences.

One of the aims of the research project is to increase understanding of voice-hearing and to challenge the stigma often attached to it by working with clinicians and other mental health professionals and listening to people who have heard voices themselves.

Hearing Voices: Suffering, Inspiration and the Everyday is open at Durham University’s Palace Green Library until 26 February 2017. It is open Mondays 12noon-5pm, and Tuesday-Sunday 10am-5pm. Entry to the exhibition and all associated events is free of charge.

Listen to our researchers exploring voice-hearing and divine inspiration.