Folk tales are older than you think 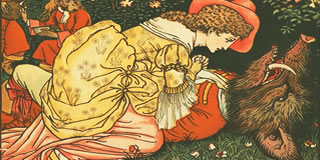 Many folktales can be traced back to prehistoric populations that existed thousands of years ago, according to research which has attracted media attention across the globe. Co-author of the study, Dr Jamie Tehrani from the Department of Anthropology explains more.

What did you find in your research?

When looking at the strong similarities among traditional stories told by many different cultures, particularly those speaking Indo-European languages, we found that some shared folktales can be traced back to ancestral populations that lived thousands of years ago. These include several stories that remain popular to this day, like Beauty and the Beast, Rumplestiltskin and Jack and the Beanstalk (aka The Boy Steals the Ogre's Treasure). We even managed to trace one tale, The Smith and the Devil, back to the Bronze Age.

Our findings suggest that these tales were passed down from generation to generation long before they were first written down, showing the remarkable stability of oral transmission and enduring appeal of these stories.

The link between languages and stories is something we focused on in our research. Indo-European is one of the largest language families on Earth and includes most populations in Europe as well as many in Asia. These languages are all derived from a prehistoric common ancestral population, called "Proto-Indo-European", that probably existed 5,000 – 9,000 years ago. As its descendants spread across Eurasia, their languages began to diverge, giving rise to distinct lineages like the Romance languages of the Mediterranean, the Germanic languages of northern and western Europe, the Celtic languages of Britain, the Balto-Slavic languages of eastern Europe and the Indo-Iranian languages of western and southern Asia.

We found signatures of these massive ancient migrations in the oral traditions of modern day Indo-European-speaking populations, and discovered that, like shared features of language, some fairytales go back thousands of years.

How did you carry out your research?

Researching the origins and development of oral traditions is tricky because, by definition, they aren't usually written down, so there's not much of a record to work with.

We drew on methods that were developed by biologists to tackle a similar problem in reconstructing the evolution of biological traits that can't be studied in the patchy fossil record. Although there are obviously important differences between the transmission of genes and of stories, it's still possible to recover information about the past that's been preserved through the mechanism of inheritance. In biology, that involves mapping shared traits on a genetic tree and establishing which ancestral species they were inherited from. We used the cultural equivalent of genetic trees – language trees. We investigated whether the distribution of folktales among populations correlated with how closely related their languages are, and traced lineages of common inheritance in language and storytelling on different branches of the Indo-European family tree back to their shared roots.

What do the findings tell us about cultures and societies of the past?

A key ingredient in the success of fairy tales is the juxtaposition of the ordinary and the extraordinary, putting humble farm boys and servant girls in the company of giants and fairy godmothers. Although these stories are frequently updated to suit different times and places, many elements - both magical and mundane - can survive for generations. This makes them a potentially useful source of information about not only our enduring fears and fantasies, but also the kinds of societies in which they originated.

For example, one of the folktales we studied, The Smith and the Devil, appears to have been present in the ancestor of Indo-European languages, "Proto-Indo-European". It tells of a smith who sells his soul to an evil supernatural being in return for the ability to weld any materials together. He then uses that power to stick the creature to a tree until it releases him from his side of the bargain.

We believe that the kinds of information preserved in oral traditions provide exciting new lines of research into our prehistoric past that complement evidence from archaeology, linguistics and genetics.

What are the next steps?

We're pursuing several questions that emerge from our findings. First, what is it about some stories that makes them so stable, and enables them to remain relevant in so many diverse cultures and historical periods? Second, is it possible to trace similarly deep roots for other narrative genres, such as myths and legends? Third, what else can we learn about ancestral societies from the kinds of stories they told – for example, their religious beliefs, ethics, family and social structure?

Who funded the research and who did you collaborate with?

I carried out the research with Sara Graça da Silva from the Institute for the Study of Literature and Tradition at the New University of Lisbon, who was supported by a research grant from the Portuguese research council, FCT.