While shepherds watched their flocks on ‘Ilkley Moor’ 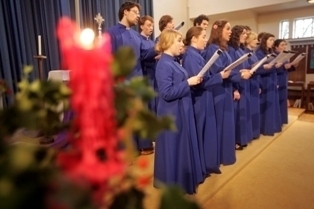 The carol,‘While shepherds watched’, used to be commonly sung to the tune ‘Ilkley Moor’, according to research by a Durham University hymnologist.

'While shepherds watched' was the first carol to cross over to the Church of England from the secular, folk tradition and carol singers might be surprised to hear that it used to be commonly sung to the tune ‘Cranbrook’, better known as ‘Ilkley Moor’ (‘On Ilkla Moor baht ‘at’’).

The tune used in most church services today is one of many variations used over the 300-year history of this much-loved carol according to Professor Jeremy Dibble a hymnologist in the Department of Music at Durham University.

During his research as Musical Editor of the forthcoming Dictionary of Hymnology, Prof Dibble found that ‘While shepherds watched’ became a central hymn for English-speaking Protestants following its appearance in 1700 when it was published as one of sixteen hymns in ‘the Supplement’ by Nahum Tate and Nicholas Brady in the New Version of the Psalms of David.

These versions supplanted the Old Version by Sternhold and Hopkins. Some people refer to the tune as being written by Tate and Brady but there is no evidence that it was actually composed by them.

Prof Dibble said: “‘While shepherds watched’ was the first carol to cross over from secular traditions to the church. It was the only Christmas hymn to be approved by the Church of England in the eighteenth century and this allowed it to be disseminated across the country with the Book of Common Prayer. Only at the end of the eighteenth century was it joined by other well-known texts such as ‘Hark the herald angels sing’.

“The most surprising and rather forgotten version of ‘While shepherds watched’ is sung to the famous 'Ilkley Moor' tune by Thomas Clark. The variety of tunes used in the 300-year history of this carol show that the lyrics are very popular. Some carol singers now feel its time to bring some of these classic tune variations back!”

According to Prof Dibble, carols, many of which have folk roots, were considered too secular for inclusion in church services. They weren’t sung in churches until the end of the eighteenth century even though prior to that they were popular around the hearth at Christmas time. The hymn ‘While shepherds watched’ might have been sung alongside (but not within) the prayer-book service – such was the custom in country churches. It may well have been sung before or after Mattins.

Prof Dibble said: “‘While shepherds watched’ is in Common Metre – 8.6.8.6. – which is the metre of many tunes and hymns. The lyrics are very adaptable and the hymn has been sung to more tunes than most other carols. 'Winchester New', now the most well known version, dates back as a lute song to the sixteenth century.

“The variations include a tune often sung in the USA adapted from Handel, and a rather nice eighteenth-century tune composed by Joseph Watts. There is also the 'Dunstan' version and an elaborate adaptation to a tune composed by John Foster.

“The tune most frequently used at the moment in the UK, ‘Winchester’, existed well before it became associated with the words for ‘While shepherds watched’. In the sixth edition of the Supplement to Tate & Brady of 1708 it was associated with St. James.

“It has been suggested that ‘Winchester’ evolved from an improvised descant to a passage of music from The Acts of the Apostles by Christopher Tye of 1553. This descant tune later appeared in Richard Alison’s Psalmes of David of 1592 and as a hymn by George Kirbye in the early seventeenth century. While this version was taking off in England as an ‘approved tune’, in the USA the text was best known in association with an adaptation of a Handel operatic aria ‘Non vi piaque ingiusti dei’ from the composer’s opera Siroe of 1728. The adaptation may have been made by the American hymn-writer Lowell Mason.

“As these more metrical versions were being established, other versions, associated with the West Gallery tradition were being sung in country churches – as immortalised in Thomas Hardy. ‘While shepherds watched’ has had a most extraordinary genesis and its progression shows the remarkable journey of a Christmas carol through a wide variety of tunes across different continents.”

One of the most popular versions was to the tune ‘Cranbrook’ – better known as On Ilkla Moor baht ‘at’, by Thomas Clark who wrote a huge number of tunes. This version was published in 1805. (Clark is also known for his words ‘Joy to the world’). While this tune enjoyed some popularity, there were many others, notably the one by Ralph Dunstan (from a manuscript of 1830), and ‘Old Foster’ which was sung in many rural areas of Yorkshire. The original version is still sung today at traditional carol sessions in pubs in parts of Yorkshire.