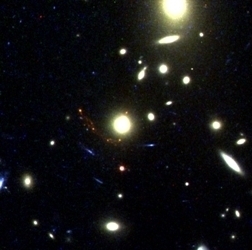 The Universe’s infant galaxies enjoyed rapid growth spurts forming stars like our sun at a rate of up to 50 stars a year, according to scientists at Durham University.

The findings show that “stellar nurseries” within the first galaxies gave birth to stars at a much more rapid rate than previously expected, the researchers from Durham’s Institute for Computational Cosmology revealed.

The research looked back 12.5 billion years to one of the most distant known galaxies, about one billion years after the Big Bang.

Using a technique called gravitational lensing – where distant galaxies are magnified using the gravity of a nearby galaxy cluster – the scientists observed the rapid bursts of star formation in the galaxy called MS1358arc.

Within the star-forming regions, new stars were being created at a rate of about 50 stars per year - around 100 times faster than had been previously thought.

The researchers, who say their work represents the most detailed study of a galaxy at such a young age, believe the observed galaxy is typical of others in the early Universe.

They say the galaxy, which measures 6,000 light years across, also has all the characteristics that would allow it to eventually evolve into a galaxy such as our Milky Way, giving an insight into how our sun and galaxy formed.

Lead author Dr Mark Swinbank, in the Institute for Computational Cosmology, at Durham University, said: “The runaway effect in this galaxy suggests it is growing much faster than expected.

“Given the size of the star forming regions, we would expect it to be forming stars at the rate of about one sun per year, but it seems to be much more active than that.

“We think this galaxy is fairly typical of galaxies at this time and we expect that the Milky Way once looked like this as it formed its first stars.

“In effect we are seeing the first generation of stars being born in a galaxy like the Milky Way. This gives unique insight into the birth of our own galaxy.”

The researchers say most of the observed stars eventually exploded as supernovae, spewing debris back into space where it formed into new stars

Dr Swinbank added: “In this respect these stars are the seeds of future star formation in the Universe.”

Royal Astronomical Society President Professor Andy Fabian said: “It is exciting to see such a detailed picture of a very distant galaxy.

“This pioneering work shows what our own galaxy might have looked like when it was a tenth of its present age."