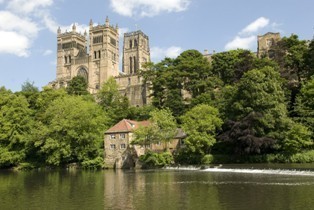 A Durham consortium of University and faith leaders hopes that Pope Benedict XVI will accept their invitation to make the first ever papal visit to the North East of England.

Following a visit of the HM Ambassador to the Holy See, HE Francis Campbell, to Durham University in March of this year, a unique partnership of University, Anglican Church and Catholic Church representatives has invited Pope Benedict XVI to present a major academic address in Durham Cathedral in the course of his September 2010 visit to the UK.

Although Pope John Paul II made a pastoral visit to the UK (including York) in May 1982, were Pope Benedict to accept the invitation, it would be the first ever papal visit to the North East of England, a region that boasts the richest Christian heritage in the UK, symbolised by the twin shrines in Durham Cathedral of Saint Cuthbert (d. 687) the Bishop of Lindisfarne, and Saint Bede (d. 735), the most learned man of his age. Durham Cathedral, which would co-host the event with the University, is commonly regarded as the finest Romanesque building in the world and, together with the University-owned Durham Castle and Palace Green, is a recognised UNESCO world heritage site.

At a time of some increased sensitivity in Anglican-Roman Catholic relations, the strong ecumenical character of the invitation is very significant. The invitation is led by Dr Tom Wright both as Lord Bishop of Durham and as the University’s senior representative, and Mrs Maggie Wright, but is counter-signed and fully supported by Bishop Seamus Cunningham of the Catholic Diocese of Hexham and Newcastle, the Chapter of Durham Cathedral, the Abbot of Ampleforth Abbey and the President of Ushaw College, the Catholic seminary for the North of England.

Bishop Wright said: “Durham has in recent years become a major global centre for ecumenical work and the close interlinking of Cathedral and University means that Durham is well placed to host an event which is simultaneously academic and ecumenically spiritual.”

The University’s Vice-Chancellor and co-signatory to the letter, Professor Chris Higgins, added: “The strong academic and ecumenical background of this invitation means there is simply no more appropriate place in the country to host such an academic lecture than Durham.

“Leaders of the major churches of the region are working together alongside scholars in Durham University’s department of Theology and Religion which was recently confirmed as the leading UK research department in its field in the most recent government Research Assessment Exercise.”

The original invitation has also received significant support from regional politicians, and a delegation from the consortium, headed by the Vice-Chancellor of Durham University, Prof. Chris Higgins, made personal representation to David Miliband as MP for South Shields in the North East.

Roberta Blackman-Woods, MP for the City of Durham has also added her support: “The possibility of a papal visit to Durham and to Durham Cathedral, a site of unparalleled beauty, would be of tremendous benefit to the North East. I’m sure that the people of Durham would feel great pride in welcoming Pope Benedict and the world’s media.”

Prof. Paul D. Murray, Director of the Centre for Catholic Studies at Durham University concluded: “This would be an event of immense academic, ecumenical, cultural and regional significance. Durham University and the Cathedral have a proven track-record in hosting global political and religious leaders to great acclaim and we would be delighted to welcome Pope Benedict to the region.”