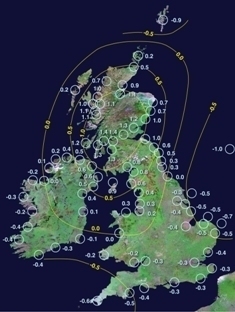 A new map plots the most accurate predictions yet for land uplift and subsidence in the UK.

The map shows that southern Ireland and Wales, and southern and eastern England are continuing to sink, whilst Scotland is rising, at rates less than previously predicted.

The ‘Coastland Map’ produced by scientists from Durham University and published in the Journal ‘GSA Today’, charts the post Ice-Age tilt of the UK and Ireland and current relative sea-level changes. According to the map, the sinking effect in the south could add between 10 and 33 per cent to the projected sea-level rises caused by global warming over the next century. *

The projections are less than previous estimations for subsidence and could help local authorities to save money on sea and flood defences through the targeting of resources to areas where sea level rises will be greatest. The data and model could also be used in planning for the managed retreat of threatened coastal communities.

Since the end of the last Ice Age 20,000 years ago, land and sea-levels around the UK coastline have changed in response to the retreat of the ice sheets. As the ice melted, the release of this enormous weight resulted in the landmass slowly tilting back up in the north or down in the south, a process called isostatic adjustment.

These rises and falls come on top of any changes in sea-level caused by global warming. In Scotland, the rise of much of the coastline will offset some of the predicted rises in sea-level due to climate change.

The Durham team, led by Professor Ian Shennan and funded by the Natural Environment Research Council, looked at the relationship of peat, sand and clay sediments that have been uplifted above sea-level or are now submerged below sea level. The team radio-carbon dated samples to see how sediments formed and to calculate changes in sea-levels over thousands of years.

Eighty sites were studied around the UK and Ireland coasts. By coring and examining sediments in drainage ditches and road excavations, the team found evidence of land rises and falls from the relative elevation of sediments. These results were assessed along with previous studies of sites including the Thames, Humber, Tyne and Tees estuaries, southern England, Ireland, Wales and Scotland.

The team used the data to test models of the earth’s response to ice load and this modelling technique can now be applied to other ice-affected countries with maritime boundaries, and can help predict the future of coastal areas around the world.

Prof Shennan said: “The rate of uplift north of the River Tyne to Scotland increases because the ice sheets there were thicker and heavier. The action of the Ice Age on our landmass has been like squeezing a sponge which eventually regains its shape. The earth’s crust has reacted over thousands of years and is continuing to react.

“Subsidence and rising sea levels will have implications for people and habitats, and will require action to manage resorts, industrial sites, ports, beaches, salt marshes and wetlands, wildlife and bird migrations.”

The new map shows how the UK and Ireland are responding to the ice sheet compression of the earth’s core and the current rate of land tilt across the UK. In Northumberland, researchers found sediments from 7,000 years ago five metres below, and others from 4,000 years ago at 1 metre above the present sea level. This indicates that the sea level rose above present levels from around 7,500 years ago to 4,500 years ago, and then dropped and is continuing to fall. Sea-levels in most of Scotland peaked even higher about 4,500 years ago and have been falling ever since because the land has risen.

Sea levels 7,000 years ago were some 15 metres below the present levels in the Fenland in eastern England, and the levels are still rising. The team predicts that levels will continue to rise as the land falls, at a rate of 0.4 to 0.7 millimetres a year.

Sea-level rise brings in sediment which is soft and consolidates in coastal areas. Sea defences built on soft sediments can suffer additional subsidence due to compaction of the sediments. The Fenland is particularly affected by sediment compaction. The Thames, Bristol Channel and Kent coast are also affected as the sediment in rivers, estuaries and flood plains settles and compresses.

The three main areas of land subsidence in the UK and Ireland (see map) reflect the advance and retreat of the Scandinavian, and the British and Irish Ice Sheets.

Durham’s new map and model also takes into account Newton’s law of gravitational attraction and ‘the Geoid effect’. Melting ice has affected the relationship between the ice, sea and land, and the mass inside the earth’s mantle. These changes have produced a gravitational effect on the surface of the water in the planet’s oceans.

Prof Shennan said: “When a huge mass of ice melts, the land readjusts over time but there’s also a response in the earth’s mantle and this affects the shape of the surface of the earth’s oceans. Changes in our oceans and land uplift and subsidence will continue to have a significant effect on our coastlines this century.”

Areas of rising land levels include: